Unaccustomed As I Am.... 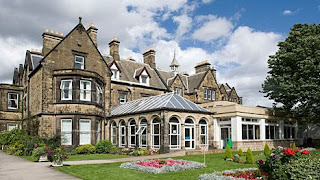 Swanwick is amazing! What a fabulous place! What elegant surroundings! What incredible food and hospitality! And such fantastic, enthusiastic and completely crazy people... THANK YOU to everyone - especially Xanthe and Joyce and Fiona and Ann and Roy who invited me and looked after me brilliantly and made me laugh all the time, and to Fliss and Jan for suggesting I'd be a good speaker (are you insane???), and to Della for everything, and to everyone else who made me feel as though I belonged from the moment I arrived and who will now always be good friends.

Mind you, if I'd known that the after-dinner speaking involved being in a theatre, on stage, with a microphone and an audience of hundreds I'd have turned tail and fled back down the motorway - but as it was, like the proverbial lamb, I trotted happily into it without having a clue what I was doing. Par for the course, I know.

I'd written a speech. I'd practised it over and over again to the Toyboy Trucker and the cats who were all fairly unimpressed. It lasted 30 minutes. I had an hour - a whole HOUR - on stage... And, I'd torn my speech up because it was rubbish and just had a few scribbled notes... Still, I thought as I gazed nervously at my cheerfully expectant audience, I'll never have to see any of them again...

In my new-from-the-market long frock and B-I-G ear-rings I took a deep breath and trying not to meet anyone's eyes in case I spotted boredom, sleep or even death, I just launched myself into the story of how I started writing, the ups and downs, the ins and outs, the good times and the bad. Oh, and I told everyone about my life, and about the neighbours and about the cats and just anything else I could trawl from the depths of what was left of my brain.

Mercifully, they were a brilliant audience and they laughed at the first sentence and carried on laughing, and the more they laughed the more indiscreet I became until they were chuckling all the time and I'd convinced myself that a career as a stand-up beckoned. The hour simply flew by. I answered all sorts of questions and told more tall tales (actually true stories, but even to me some parts of my life sound pretty impossible) and incredibly got a standing ovation.

Now, I'm ashamed to say, this all went to my head a bit. Afterwards, having signed and sold loads and loads of books and been congratulated on being funny a lot, I practically preened and flounced. I was an inch away from snapping my fingers and throwing back my hair and demanding roast swan and the finest champagne. Happily, because I'm a vegetarian and only drink beer, it didn't quite come to that. But almost. As I clutched my pint and my cigarette and skipped round Swanwick's glorious grounds in the moonlight, I was very nearly getting above myself.

Thankfully The Toyboy Trucker brought me down to earth with a "your bra straps are showing, you've got lipstick on your teeth, your hair looks all funny and you've lost an ear-ring - you look like you've been in a brawl".

Now I'm home again, all diva-ness forgotten, and as is the way of my life, the TWTAWH proofs have arrived in Pdf format and have to be done online and returned by Thursday and we're having the bedroom renovated (posh way of saying the 1970s built-in crap wardrobes are being pulled out and the one measly electric socket is being - er - extended and the funny little wash-basin thing in the corner is being turned into something altogether more swish) which means intermittent electricity so I really ought to get on with them... Have to say that even after severe editing, TWTAWH is still standing at 455 pages!!! 455!!! That's almost War and Peace! I've got to proof-read War and Peace!!!! Aaargh!!!!
Posted by Christina Jones at 08:45

Bwahahaha - you do make me laugh! lol So glad it went well though and it sounds as if the photos will be...erm....interesting! xx

Jayne - oh, bless you for laughing... As always, it's quite funny now it's over - I was plain terrified at the time, I can tell you - and hopefully there are NO photos....

Wish I had known you were at Swanwick. My mum lives 10 mins form there! AARRRGGGHHH! I was there!!!!
Did you know that Swanwick is where Franz von Werra, a Luftwaffe POW escaped from. The film, The One That Got Away is based on his story. He was captured at RAF Hucknall trying to seal a plane! Sorry - random topic. Did you make it onto the Steam rRailway at the bottom of the hill??

Well, I was actually lucky enough to be up at Swanwick...and in the audience for your fantastic, funny, interesting, funny, endearing and wonderful talk (oh, and did I mention it was really funny as well?) As a humble first-time attendee, I didn't feel up to tossing aside your tribe of admirers to actually talk to you afterwards, but I really wanted to say how inspirational you were and how much I (and everyone else around me) enjoyed the session. I did gulp a bit at the sudden realisation that,as I was an avid reader of both 'Romeo' and 'Jackie' magazine in my younger days, you were probably the one who informed my understanding of boys and their mysterious ways -I don't quite know whether to thank you or sue you!! Loved what you wore, liked your earrings, enjoyed seeing your husband -and am still laughing about what you shared in the more indiscreet areas of your talk. Thanks for coming - I am now really looking forward to re-reading your existing books...and waiting eagerly for the next one.

alzamina - thanks for the distance-proof-reading support. I damn well need it!!!!!!!! There! I KNEW I should have said I was going to be at Swanwick! We could have met up -again! So near and yet so far... No, didn't know about the German links (although TTT did get pretty immersed in the history of the place because he loved it so he probably knows) and didn't get to see the railway either - sod it! - love steam trains! Thanks for the FB top-ups - much appreciated - I'm a flake...

Ruth - OMG!!!!!!! You were THERE???
Oh, I do wish you'd come and spoken to me - I was just so overwhelmed by all the madness afterwards (because it went okay and I'd survived and no-one booed me!) I would have loved to have spoken to you. So - THANK YOU for everything you've said on here. I've just cried reading it. I'm so, so glad you enjoyed it, and sorry if I tainted your youth via Romeo and Jackie!!! I honestly was petrified, had no idea what I was supposed to be doing or saying - but someone said just be yourself - so I was. Please email me. Thank you again for all those lovely, lovely comments... Oh, blimey - I'm awash now... love and thanks C x

Hysterical about TTT telling you about your bra straps, etc. so funny.x

Oh my word, what a divine location to have to go to!

Debs - thank you for your confidence - I can assure you I didn't have any! And as for TTT's remarks - well, what else would you expect??? Cx

Rach - yes, it was pretty gorgeous - I can think of worse places to "work" - but, fab as it was, I must admit I got far more inspiration for new book from a certain fairy-lit garden in July...

If you ever come to the Isle of Skye we'd love you to give a talk! There's always a welcome here in the mountains!

Well done, Chris! It sounds fantastic! And the best bit was selling 'loads of books' afterwards! - I'm always pathetically grateful if I sell even two books after one of my talks ... mind you, they're only ever at Rotary Club or U3A meetings or in libraries!!
And as a beer-drinking vegetarian myself, I have to congratulate you on your good taste in food & drink by the way! x

Well done on the after-dinner speech - wish I had been there! Maybe one year I will come to Swanwick, I hear such good things about it (from Della!) and if they have speakers such as yourself that's an extra draw. Now then, any tips for escaping the hubby, kids and mother for a week?

Olivia - thank you! And I *knew* we were kindred spirits!!!! I'm lousy at selling my books - always say stuff like "are you sure you really want to buy one?"...

womag - thank you! And you'd love it! It's completely mad and friendly and wonderful... Escaping for a week? Tell them it's work, and as a result you'll be upping your earning power and will be able to provide so many more of those little "must-haves"... Cx