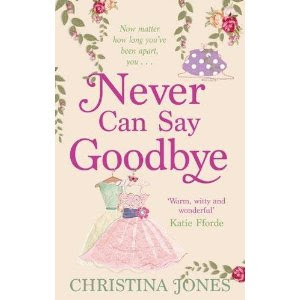 Yes, I know NCSG isn't out until February next year (hardback in Sept this year) but I absolutely LOVE the cover, so I'm making no apologies for using it as the illustration for this post. I think it's just so girlie and pretty... I've got a copy pinned on the wall in front of me and I just sigh wistfully over those gorgeous frocks and the fabulous trailing roses and the to-die-for handbags... Thank you so much to Louise Anglicas, the clever, talented artist, for producing something so totally beautiful.

And as Never Can Say Goodbye is about a retro frock shop run by Frankie, the heroine, and has a DDG florist, Dexter, as the hero - then the frocks'n'flowers combination works so well. Yep - it's official - I'm in love with this cover...

Of course, there's a lot more to NCSG than just frocks'n'flowers. It's winter in the quaintly old-fashioned Berkshire village of Kingston Dapple - a very, very cold winter - and Francesca's Fabulous Frocks in the market square is home not only to a mass of vintage dresses, but also to a collection of very odd people. There's Brian from the kebab van; Biddy the bitch; Lilly, Frankie's air-head flat-mate; Cherish, the worst colour-palette-advisor in the world; Maisie the useless medium - and of course Dexter, the philandering Beckhamesque florist and his many conquests. Several of my previous characters appear too: Slo and Essie, Phoebe, Amber, Clemmie, Sukie etc, and all the cooks from The Way To A Woman's Heart - oh, and of course there are also ghosts... ghosts with attitude... ghosts with issues... ghosts with frock-envy... funny ghosts... sad ghosts... and even ghosts who don't know they are ghosts.

I've always wanted to write a rom com ghost story and am so pleased that Never Can Say Goodbye rounds off my practical magic series nicely.

So, yes - the good news - I've just been offered a new deal by my lovely publishers Piatkus/Little,Brown (thank you!!!) - and the bad news (maybe?) - it's the end of the current series. After eight books, we've all decided that it's time to say goodbye to the magic and hello to a whole new world.

So, while I'm still going to be bucolic frolicking in rural Berkshire, it's goodbye to Hazy Hassocks, Bagley-cum-Russet, Fiddlesticks, Lovers Knot and Winterbrook and their inhabitants - and hello to Nook Green, Daisybank, Bluebell Common and Maizey St Michael along with a whole new set of characters having a whole new set of romantic and hopefully funny adventures.

I think it'll be hard for me to leave the Hubble Bubble world behind - but I'm very excited about getting to know my new villages and meeting the people who live there. And as the first one (currently imaginatively titled Book One) in the new series has to be written, finished and delivered by Feb I really ought be popping off to Nook Green right now...
Posted by Christina Jones at 07:37

Lovely cover. I have loved the Hubble Bubble series and I'm sure I'll love the next one. Get writing please! Mx

Morton - thank you so much. I'm really sad about leaving the Hub Bub crowd behind - but it's nice to have a new challenge (I think...). Okay - I'm writing!!! Cx

Fantastic cover, Chris and I can not wait to read the book. I'll be sad to think I won't be meeting those lovely characters again - but I'm sure I'll love the new ones!
xxPat

I too have loved the books that I have read in this series. I am now reading Heaven Scent but The Way To a Woman's Heart was actually one of the first books I downloaded onto my Kindle. It will be shame to say goodbye to them, but can't wait for the next series.

Only just found your blog and reading some of your archived blogs has had me crying with laughter, especially the incident with the escalator. Keep on writing you make my day.

very upset that this is the last of the Hubble Bubble series, as I adore them, but I'll be brave, as I'm sure I can trust you to be just as brilliant with the new series, sniff, sniff.
I may have to have a lie down , with some chocolate, and a G&T, IT'S THE SHOCK! ;)
Love all your work, so I'll get over it .

Pat - thank you. I can brag about the cover because it was absolutely nothing to do with me...
And I was pretty upset to think I'd never see Lav and Lob and Mitzi etc again - but never say never - the new villages are only down the road - there must be buses - they might pop up... Sorry, going slightly doo-lally now. Cxxxx

Linda - thank you a million times on all counts for everything you've said! You've made my dreary afternoon suddenly tons brighter and stopped me grizzling... Cxxx

Crazy Jane - oh, bless you. I didn't resort to the chocolate and G&T when I was told it might be a good idea to move on, because of Weight Watchers and I'm scared of my WW leader. I did have a small tantrum though - no calories in a tantrum. I'll be okay once I've drifted around Nook Green a bit more in my head and got my H&H (Erin and Jay) sorted out - oh, and found a suitable title... Book One just doesn't cut it for me. Cxxx

That's a beautiful cover and I can't wait to read NCSG.

Congratulations on the new contract, Ma and I will drink a toast to you tonight in Paris. x

Debs - thank you so much - and I was really happy with your post until that last bit! I want to be with you and your Ma in Paris now... C (sulking) xxxx

That cover is fabulous - but it's a long time to have to wait. It's funny to think the pb version will be out at the same time your new book is due to be finished. Congrats on the new publishing deal, & I'm sure you'll create a whole new wonderful world of exciting character for us to enjoy. It's sad to have to leave the 'Hubble Bubble' crowd behind, but I am looking forward to the unknown characters. I hope that writing about them comes easily to you, & that it's fun.

Karen - thank you - I think this is the loveliest cover I've ever had. I know - it is weird to think I'll have to be promoting NCSG as my New Book at the same time as delivering Book One of the new series which I'll *think* of then as my New Book, and then straight into writing Book Two of the new series which will really be my New Book - eeek - now I've confused myself - very easily done... I've got some new characters up and running in my head and have started Book One (still no title though which is a first for me - usually I can't write anything without a title but this one - mostly about weddings and junk shops {!} is proving tricky...) Cxxx