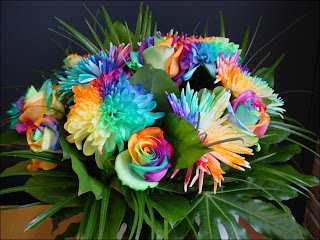 Dear Blog - I'm very sorry that I've ignored you for so long, but you know how it is... stuff happens, some things have to take priority, other things get ignored - and yes, sorry again, but you were among the latter. I can see you've gone sniffy on me because everything's changed since we were last together. The Blogger layout for a start - and now the font and the settings - and I'm not sure that I like it. Hopefully, once we get used to one another again, it'll be okay.

And I've given you a gorgeous bunch of flowers here by way of apology and to show that we're all happy again. We are, aren't we???

So, Blog, I'm going to explain briefly, why you've been left to wander alone and unloved in Blogland since that last rather hurried post in Feb. FIVE months ago! Erk...

You see, Blog, you're supposed to be a happy thing. We've shared some tough times since we've been together, yes, but mainly you've been a source of light relief, something to smile over, maybe even raise a chuckle or a little giggle. And honestly, Blog, life has been a bit well, un-smiley and un-chuckly and un-giggly for ages and it seemed unfair to inflict a whole wodge of - basically - sad crap - on your shoulders. So, I ignored you.

Anyway, life now seems to be on the up - so I'm back and I hope you'll forgive me. The new book - AN ENORMOUSLY ENGLISH MONSOON WEDDING - is finished and with the copy editor. Now, you'll know that this book has been a bit of a trial - not least because when I'd written half of it - about last September - the computer crashed and burned and - gulp - I hadn't saved any of it. Yes, I know I'm useless - no need to rub it in. The boys at PC World did a good job of scraping the residue from the hard-drive but then it all had to be transported to the new computer - and it didn't like it. It just spat at me. And I was rubbish at trying to marry it with the new Word thingy - so I gave up and started writing it again...

Then everyone in the family was ill - I mean mostly hospital-ill - and I should have had a season ticket to that car park! Oh - they're all fine now, thanks, but half my life seemed to be spent in various wards and departments for weeks and I wrote zilch.

Then there were the deaths. Not related to the above paragraph I'm relieved to say. And no details, Blog. But three very good friends, all young, all sudden. Three funerals, three lots of consecutive heartbreak, three lots of grieving, masses and masses of tears - and no writing at all. My heart simply wasn't in it.

So, when I wasn't at hospitals or funerals, I was at the vets. Lexie, with her inoperable intestinal *lump* and Emily with her epilepsy and kidney failure, were backwards and forwards on a daily basis for weeks and weeks and each visit had me in stomach-knots and floods of tears. And I found it hard to write anything at all - let alone something cheerful. Oh, yes - against all odds, both Lexie and Emily are doing well, thanks. In fact they're both in the garden in the sun (do you remember sun?) as I'm typing this, having eaten a good breakfast and look set to carry on for a good while yet - but it's been touch and go for ages... And you know me, Blog, I can never write when the cats are ill.

So, the book was late. Very late. And I panicked - a lot. And worked off-line - again, no time to visit you, or answer emails or anything. And then, even when the book was done, I knew it wasn't great because I was unhappy - and there were rewrites - twice - which scared me because I began to wonder if this poor book, with so many fits and starts, would ever be a) finished and b) any good. I'm very happy to say, Blog, that thanks to a lot of understanding, hard work, careful suggestions and more patience than I'd have had with me, by my lovely editors and agent, AN ENORMOUSLY ENGLISH MONSOON WEDDING has finally turned into the upbeat, romping book I'd always hoped it would be.

So, all the above is really why I've been AWOL for so long. And there was other stuff too - legal stuff, too tedious to mention - but it all ate into my time. It's been one of those years...

However, and with fingers and toes tightly crossed, I'm going to say that I think things are finally getting better. I'm feeling more positive and yes, rather stupidly (?) I've just decided to write four books at the same time. Yes, I know - but I had four ideas that wouldn't leave me alone - so I'm currently writing bits of each one every day. And now the sun's shining (literally and metaphorically) and I'm smiling again. And I'm back with you.

Posted by Christina Jones at 09:00

Glad you're back and feeling a bit happier.

Aww, Chris
What an awful time for you! SO glad things (and people and pets) are on the up now.
I can't wait to read your new book - is it due out in February? Or earlier?

I'm in awe of the 'writing four books at once'. LOL, it's taking me all my time to finish a novella and write a couple of shorts in between.

Fabulous to read your blog again chris! So glad that after the crap time you've had, your out the other side and things are looking up and books are being written, can't wait to read them all x tons of love from us 3, me, lyn and kaysha, who's wagging her tail at you as I write! X Tracie x

Good to have you back - and congrats on the book.

Thank you so much - I know it's just life, and everyone has these sort of rubbish times - but it just all got on top of me... Glass is half-full again now though! Cxxx

It's so nice to have you back! Your blog has been missed!

I always worry when my blog friends disappear but, it's even worse when a blog friend is also a favorite author! I was hoping you were so quiet because you latest novel required attention and not because of tragedy.

I'm so sorry that it was actually both.

Remember, Chris -- you are deeply loved and appreciated out here!!

Sorry life has been so rough lately, Christina. It's great to see you back.

Congrats on finally getting the book done! Sxxx

Great to have you back and to have your next fab book to look forward to.

Here's hoping all the sad, worrying bits of your year are behind you.x

Welcome back! I'm sorry to hear about your losses and the ill health of your loved ones. I hope everyone is well and back on their feet!

Welcome back! I'm sorry to hear about the loss of your friends and the ill health of your loved ones. I do hope they are doing better now. I look forward to hearing more about the new book and your many upcoming endevours!

Nice to have you back again. Sorry to hear of all your troubles.

Writing 4 books at once sounds completely mad, but good luck with it!

Sorry to anyone I didn't reply to the first time round - just want to say a huge THANK YOU to you for being so kind and lovely and understanding. Of course I was a little bit premature in assuming life was getting better - hence the huge gap in the blog AGAIN -but I've now accepted that 2012 is just not my year and maybe next year things will be better.... The four books have been slashed to three, but I'm still plugging on with them... Onwards and upwards!!! Cxxxxx