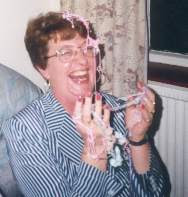 Loads to say - have been on hols and will catch up with everything else asap, but this post is just a memorial to my Best Friend Forever, Pat Powell, who died suddenly 8 years ago today.

It was an equally gloriously scorching June day in 2001 and I wasn't there. I was helping ma-in-law move house and didn't know. It seems impossible that I've now lived for 8 years without Pat. It also seems impossible that my life has changed so much without her. I've had to do so many things differently. Having a Pat-less life was something I'd never even thought about. No-one prepares you for losing a best friend.

We'd been best friends since we were 16 - we did everything together, worked together, went on holiday together, saw each other all the time and spoke on the phone several times a day. Pat was my social life; she was my happiness and laughter; and the kindest, most loyal and generous person I've ever known. Today I cried for her - I still miss her so much - I've got loads of friends, really good friends who I cherish, but you only ever have one lifelong best friend - and there'll never be another Pat.

Pat and I had always decided we were going to die when we were 97 and we were going to have a joint funeral with blue and yellow flowers, lots of rock music, champagne and cream slices (our favourite indulgence). So this afternoon, on this sweltering sultry day, I've been doing what I've done each June 30th for 8 years, sitting in the garden on Pat's special seat (an ancient bench, crumbling now but I'll never part with it), listening to AC/DC, drinking (warmish) champagne and eating a (very slippery and melting)cream slice, with my Californian poppies and lobelias providing the properly-hued floral background.

I raised my glass and my cream slice to her - and now I can say again on here what I said to her just now: "I miss you every day, I think about you every day, I still expect you to walk up the path, I still wait for your phone calls, I still hear your laughter. I hope you're happy - and please, please don't be resting in peace. Please be having the best time ever with loads of fun and giggling." Then I sniffled a lot -which would have made her very cross - so I came indoors to write this as a proper memorial.

We had "Ain't No Sunshine When She's Gone" played at her funeral - and today, for me, it's true.
Posted by Christina Jones at 14:47 15 comments:

Sorry - had to do the title phonetically as "Reading at Reading" looked weird. And of course this post is far too late to be any use in a promotional way (the story of my disorganised life) but this is just a quickie to say if any friends and Bucolic Frolic readers are anywhere in the Reading (that's Redding) area tomorrow (Monday June 15th) I'm giving a reading (that's reeding) at the Central Library at 6 pm as part of their Arts Festival shindig - and I'd be thrilled to bits to see you there.

More details at http://www.readingarts.com/othervenues/whatson/event.asp?id=SXC621-A7818625 - think you can cut and paste that... (she says in her usual non-techy manner) - anyway, there are refreshments included which makes it well worthwhile in my opinion...

And, to be honest, it's not a reeding (but I still liked the reading/Reading thing so I used it in a sort of artistic licence way) - it's more a Q&A session as a) I make everything I read aloud sound like a dirge and b) I've got a bunged up nose and therefore keep sniffing and c) at least if people ask questions they might stay awake...

I'd love to see anyone who might be in Redding at 6pm (although why anyone would want to be I have no idea, as surely the shops will have shut and everyone will have gone home for their tea?) at the Central Library (in Abbey Square) because, quite frankly, if it's just me and Em-Next-Door-As-Was (she's coming along to organise me - making sure I have a clean hankie and have been to the loo etc - and to sell my books for me - hopefully) and three librarians I'll probably cry...

This is the first time Redding have invited me to do anything - and I'm really looking forward to it - and as all my books are set in Berkshire I think it indicates that they must have forgiven me for portraying the royal county as a mad place inhabited by even madder people...

Am just off now to polish up my spontaneous answers to pithy questions like "why don't you look like your photo?", "why aren't you Katie Fforde?", "do you earn as much as that Harry Potter bloke?" and "why don't you write like Jackie Collins. I likes Jackie Collins. Why don't you do sex?" - all things I've been asked more than once and really should be able to answer without sobbing by now.

And if you can't make it in person I really, really hope you'll be there in spirit as I think I'll need all the help I can get...
Posted by Christina Jones at 09:52 28 comments:

You Couldn't Make It Up 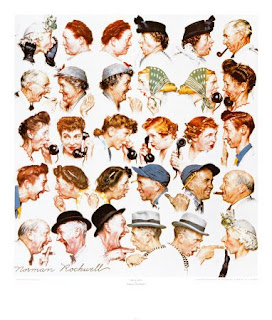 As the computer has been having yet another on/off hissy fit and I've been forced to work off-line (again), I've been writing more (yay!) and procrastinating less (well, sort of) and realised just how much "stuff I've overheard" goes into my books and stories. If asked, I usually say it's all made-up - but it isn't, well, not all of it...

This year, because last year was horrible for all sorts of reasons, The Toyboy Trucker and I have been making the effort to go out on a Friday night. Nothing swish you understand. Just for a cheapo meal in one of the many restaurants in our small town that are practically empty these days (along with the pubs - a sad sign of the times), so that we can actually talk to one another about our week instead of slumping in front of the telly and grunting. And every Friday night, because the places are so empty and the sound carries so well, I can also listen. And not just to The Toyboy Trucker...

Recently overheard (and squirrelled away to be altered ever-so-slightly and used at a later date) snippets include:

"... and I'm on statins and Warfarin and aspirin and me blood's like water and you can't say better'n that..."

"... and then when HE comes home she 'as to perform 'er wife's duties straight away - an' sometimes HE'S that impatient she doesn't even 'ave time to take off 'er Marigolds..."

"... just listen to yourself. You're setting her up to be some sort of saint. Yes, I know she's only just died but she was a complete cow and I don't mind who knows it. Oh, and she hated your guts - always did - even if she was your mother..."

"So then, once we'd got the pearl barley out with the tweezers..."

"Why in God's name would anyone with her problems want to wear that colour? She looked like a bloody turnip."

"Don't you talk to me about political correctness, I said. I'll speak my mind - I don't care who I insults, me. People should 'ave thicker skins. I always tells the truth. I think it's why people like me. Silly sod wouldn't 'ave it and just kept crying though..."

"Boils run in our family. Me dad was a martyr to boils. Always had pus on 'im somewhere."

"... we went to Madeira. Nice place but we wouldn't go back again. It was full of foreigners..."

"Joan - her with the big nose and the poodle - she won the lottery last week. A tenner she got. She's only been playing for six months at a pound a week so she's quids in..."

"So I said to Nev, you don't want to mix with the likes of her. Everyone knows what she gets up to. She votes Liberal Democrat."

"... and it never even said swingers on the invite. And even if it had we wouldn't have known what it meant because we don't read the posh papers, and then even when that fat girl from Londis - you know the one who had the accident on the bouncy castle who thinks she's a cut-above? - said what it was we thought it was something to do with Frank Sinatra or big bands because it was for their silver wedding and it was in the village hall after all, and you could have knocked us down with the proverbial feather when we realised it meant - well - swapping. There wasn't anyone there I'd have wanted to swap with thank you very much. And, I ask you, who'd want our Frank with his feet? He's never had his socks off since 1983. Our Natalie said afterwards that what's you get for trying to mix with the upper classes..."
Posted by Christina Jones at 06:13 25 comments: