And I Only Went In To Buy Cat Food... 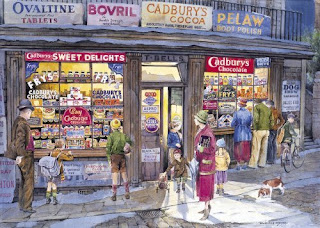 What a to-do! And I'd only abandoned Moonshine (another chapter written today but still nowhere near meeting the deadline, but it's all going well at the moment so I'm optimistic that maybe in about three weeks I'll have a book - don't hold me to that though!) for a few minutes to pop across the road to the Eight til Late (there has been a bit of a Store Wars here recently as rivals have set up across the green with a more daring Seven til Eleven - but I'm still faithful) to grab some cat food.

Before becoming indispensable (???) behind the bars at the Weasel and Bucket and Hairy Harrys, I used to do a few hours in the Eight til Late, and Ravi is one of the nicest bosses I've ever had, always slipping me a few ounces of pineapple chunks (the retro-sweets-in-a-jar sort, not the tinned fruit in syrup which would be very messy), or a quarter of haslet (he never grasped that as a vegetarian, haslet wasn't really ever on my menu - anyway I used to give it to Maudie next door for Wilf's sandwiches, so it went to a good home) at the end of my shift. Anyway, as usual, I've digressed...

There I was, pushing my way through the throng that always gathers by the "special offers" basket - this week consisting mainly of Christmas puddings, mince pies, After Eights with snowflakes on them, and a selection of rather dented novelty Santas - when I became aware that the crowd round the counter was even more frantic than usual. The customers in The Eight til Late would put any City trading floor to shame the way they wave their arms around and shout and barter for a good price, so we're used to a bit of noise, but today it was total mayhem.

Ravi's wife, Shulie, who is usually the epitome of calm unflappability, was yelling into her mobile phone for an ambulance and directing some sort of military operation at the same time, egged on by a lot of very verbal pensioners in woolly hats. By the time I'd managed to grab two boxes of As Good As It Looks (it isn't by the way - The Toyboy Trucker inadvertently tried some once after a night shift and was sick) and found a gap near the counter, I could see what all the fuss was about.

Big Lorna, the Eight til Late's part-time assistant, had gone into labour just in front of the "Eastern Delights" chiller cabinet. This was something of a shock I think (to everyone else I mean, presumably not to Big Lorna) as no-one had actually noticed that she was pregnant.

Fortunately, once she'd called the ambulance, Shulie managed to get Big Lorna out of her tabard and away from the shelf of sardine samosas as they were on pensioners' special and some of the older estate residents wouldn't have been averse to scrambling over Big Lorna to reach a bargain. As I'm pretty squeamish and luckily my close-encounters with childbirth have been minimal, I stood well back, but I did suggest to Shulie that it might be a good idea to get Big Lorna out of her tights and sandals too - otherwise it would be like Daphne on Neighbours who gave birth without removing a single item of underwear.

The ambulance arrived remarkably quickly. They're very good, the emergency services, at turning up to things on the estate. I suppose they always know it's genuine. And once the paramedics had thrust their way through the audience and managed to stop Big Lorna biting them (her language - always ripe - was frankly appalling), it only took them seconds to shovel her up onto a stretcher. Everyone stood back like Moses parting the Red Sea and clapped as she left the shop.

The Eight til Late went pretty quiet after that, and I paid for the cat food and came home and back to the computer, wondering if I could incorporate an unexpected corner shop birth scene in Moonshine, and eventually decided I couldn't as it would probably be edited out.

Heard later from Shaz and Nikki that Big Lorna gave birth in the back of the ambulance in a lay-by on the A34. Shaz said it wouldn't be the first time Big Lorna had been legs-akimbo in a lay-by on the A34 which I thought was pretty harsh. True, though... Anyway, she's called the baby Clint. She says it's after one of the paramedics. Shaz and Nikki reckon it's because it was fathered by the cowboy builder who came to repair her guttering last summer. Mother and baby are doing well.
Posted by Christina Jones at 00:37

Bwahahaha - you've given me the giggles again! Thank you! Glad to hear Cleo is going to have her bubba in the 8 til late then! xx

By gum, you see life in your neck of the woods. The only remotely exciting thing to happen in our village shop was... was...

Mummy - thanks for giggling. I thought I should share this little snippet as my blogging has become a bit grown-up, whingey and serious of late. Still don't think I'll get away with a fictional corner shop birth though...

Damn Jan, if you could remember your corner shop anecdote I could pinch it and use it to fill up a few more Moonshine pages - not of course that as a Real Writer I do anything as crass as filling up pages with cribbed stories - no way! I craft and hone and toil over every perfect word...

Oh, Chris, you've really cheered me up!!!! The things that happen on that estate!!! Glad to hear mother and baby are doing well - and even more delighted you've done another chapter of Moonshine. You're a star. And I know you'll do it and it will be fab.

Mags - glad to have cheered you up while we're all in deadline hell - and you know only too well the sort of odd stuff that happens here (and I haven't even touched on Peter the obsessive drain-rodder or Joshua and his hat-with-ears...)! More about Moonshine (hopefully) in the next post - gulp!

Sounds like a typical day at work for me as an Environmental Health Officer!! Some of teh stuff we come across would either have you rolling with laughter or vowing to never eat out again!!

Love the books, can't wait for the next one - just found this blog and will be checking in regularly to get my CJ fix!!

Alzamina - hello, and lovely to see you here - really hope you'll be a regular Bucolic Frolicker. Thanks so much for liking the books (I'm the least confident writer in the world)- and Environmental Health - fantastic! I've seen THOSE telly progs and had to hide behind the sofa - you should write a book!!!!

OMG Mags!!! I couldn't possibly tell the postman's story on here! And anyway, would anyone believe it??? It'd be on a par with the tale of the paramedics at our wedding reception...

Best laugh I've had for ages - fantastic, I'm sure you can incorporate that into a book, or make a lovely short story out of it! Especially the ending, in the layby ... and the naming of the baby ...I loved it!

The Write Woman - thanks for laughing. It cheered me up to be back in the cut and thrust (literally?) of estate life for a few moments instead of panicking over this deadline and worrying myself sick about money. I might well use the outline as a short story one day -or if I run out of Moonshine words I may just shove it in - in a carefully honed and crafted way of course...

I didn't think things like that actually happened to people in real life-here's hoping I get to have my own impromtue birth (and by my own I mean, someone else's in my presence)

Roshni (me x 5?) - this is a very old-fashioned working class housing estate. We have some very weird and wonderful characters - and because I'm nosy and a people watcher I notice EVERYTHING (not that anyone could have missed Big Lorna!)- and eventually use it in my books (heavily disguised, of course!!!). Good luck with having your own Big Lorna moment!!!

Gonna Be A Writer - so glad it made you giggle. It was too good not to blog about (and I know Big Lorna's not on line - so hopefully she'll never know...)

Chris, you've just made me roar out loud, and given that it's nearly midnight (yup, I'm up working late again!), I'm quite lucky I didn't wake the whole house up!

We get very little going on in our village either. Or rather, I'm always nose-to-the-computer/cleaning-makeup-kit, so I miss it all!

But we did however lose our vicar right in the middle of our wedding ceremony due to an untimely incident in the hospital... and then there was the time of the runaway roundtable float round the estate with a couple of elves and a yellow vested 'official' running after it....

That was hilarious, though it makes the Spar up the road seem terminally dull compared to your shops.

Glad mother and baby are doing well, and that Moonshine is progressing. I can't wait to read it.

Hilarious!! Maybe your next novel could be set in a corner shop?

sam - now you've made me laugh - and splutter coffee all over the keyboard! How could you lose your vicar in the middle of your wedding????

debs - oh, I love your Spar though!!! Everyone round here is a bit odd - which is probably why we fit in so well???

karen - thanks for enjoying it - and oooh, yes! A corner shop based story... GREAT idea - thank you!

Oh, thank god for something to smile about. Have just had a lovely letter from an ed with wonderful praise for my work... and rejecting it.

Chris, we can look back on it now and laugh, but not so funny at the time, when the vicar said 'ahem, does anyone have a mobile phone?' to a sea of blank/sheepish/guilty faces. followed with 'I'm not going to tell you off, I just need to borrow one'!

My eldest brother stood up and offered his to him, to which the vicar then said 'thanks, now, does anyone have the number for the hospital?' as he processed back down the aisle, gown flowing and mobile phone clamped to his ear!!!

Fantastic that we have it all on video!!! Tell Elle and The Doctor that they MUST have a videographer for moments just like that...!

I guess it's sad that you can't put it in Moonshine. But, it sounds like there might be a short story there someplace. In any case, It made a GREAT blog post.

Chris, I'm so happy you're posting again (and that I found you)

trotting off to catch up on the (21!!) comments

Oh, and I should have said that I had to pull myself up from the floor where I was rolling around laughing to write the above comment!!

sam - thanks for filling in the details! Amazing!!! Will make sure Elle and The Doctor have a camcorder on hand to capture EVERYTHING!!!

katiebird - thanks so much for laughing - I'm thrilled that we've linked up again too! I'll probably use the Big Lorna story in a short story for one of the more - um - robust women's mags...