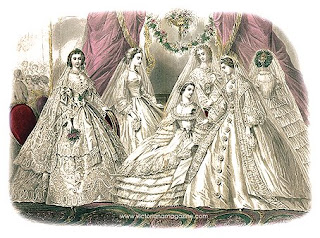 Just back from The Final Fitting of THE DRESS which is now hanging, swathed in a white protective carrier, on the back of the bedroom door. I'm actually surprised I can see to type as I'm still moist-eyed and soggy. I sniffed bravely as Elle stepped into it, snuffled not-at-all-bravely as the fitters all fussed around nipping and tucking, then howled uncontrollably as she finally swept into the showroom.

O-M-G. All those years ago when Elle was tiny and she'd teeter around the bedroom in my shoes and a net curtain playing weddings I'd hoped that one day it'd be the Real Thing. And now it is. And she looked so beautiful (of course I'm TOTALLY unbiased) - and that's without the hair-do and the make-up and the additional tiddly accessory things... She'll blow them away... She looked radiant and calm and just so HAPPY. The dress is sensational - just right for the princess wedding she's always wanted -and so is she... Elle, if you're reading this, I'm SO proud to be your mum.

Then there were the bridesmaids to final-fit, and me - and the whole place was awash with net and silk and frou-frous of every imaginable type. And despite us being in crack-of-dawn Tuesday morning scruffy-ish hair and minimal slap, I think we all looked wonderful. And in FOUR days time it'll be the Real Thing. FOUR days!!!

On Sunday the boys had their final suit fittings and they were transformed too. And yes, I cried - again. Writing has been abandoned, emails have gone unanswered (sorry!), all normal life is on hold until After The Wedding. I'm wallowing in every joyous minute of this. And it's all gone wonderfully to plan - except for the weather forecast of course - and they might be wrong about that (and even if they aren't it's the one thing we can't alter so I am not going to worry about it - honest)...

There is one other minor hiccup which I'll gloss over in as few a words as possible as I've done my stomping and swearing and ranting and screaming in private. The Toyboy Trucker's family have decided (at the eleventh hour) that they won't be coming.

I'm not going to expand on the reasons why or how I feel about it because the blog would probably explode - but suffice it to say the "family" table will now look a little bare... As I have no family it was all down to my in-laws to wave the flag for our side. Something they all seem unable to do now - despite all having replied to their invites in the affirmative. I'm hurt, Elle's hurt, The Toyboy Trucker is hurt - but hell, that's families for you. I'm actually glad today that I haven't got one.

All our friends, some of whom are travelling immense distances, Elle's friends, The Doctor's friends and family (who will be there in supportive force, bless them) and the entire estate (and you should see some of their wedding outfits - amazing!!!) will more than make up for the ill-manners of my outlaws (who you'll be unsurprised to know I have now excommunicated for ever). And it's their loss - and all the more food and drink for the rest of us.

And as everyone told me there'd be at least one hitch, and everything else has gone smoothly, if the lack of family support is the hitch then so be it. We won't miss them - but I have a feeling they may well miss us in the future.

Am now going to help Elle pack her trousseau (isn't that a lovely old-fashioned romantic word?) for their honeymoon - they're off to Hawaii for three weeks and I'm not in the smidgiest jealous (hah!) - and practice walking on my killer heels again and try to rehearse my in-service reading without bawling...

Oh, Chris, how lovely it all sounds. Can't wait to see the pictures.

Thanks Lesley - it's all very exciting - even if this OTT wedding would be my idea of hell... But it's what they want, so that's fine... And yes, there WILL be pics - lots of pics...

Only two members of my family came to my wedding last year and most of them didn't bother to respond. DOn't let it get you down - friends will rally and the day will be even more magical because of it :-)

Aw Tam - thanks - that's made me feel loads better. True though - you can choose your friends but not your family - and at least we'll all know that everyone who's there really, really wants to be.

It sounds dreamy, Chris.
And you know what? Your family will be there in your heart and your memories and they'll be watching over you and Elle.

Sniffle - dab moist eyes - I'm pretty much awash myself at all your descriptions. And sweetie, how could you possibly think that your own true family won't be there in spirit if not in body? They will - and you'll all be having such a fantabulous time that one bare-ish table won't even be noticed.

[word veri: laxagiel, which sounds like something you should be sending to the out-laws]

Weddings really can bring out the worst in people, but I'm sure it'll be a wonderful day :o)

Fingers crossed for the weather!

I can't wait to hear all about it, Chris. It sounds wonderful. I hope Elle has her dreams all come true and that you cry happily all the way through. Your family will indeed be there with you throughout, sharing those special moments with you and for those who have backed out....good riddance. If people aren't bothered enough to turn up then the wedding will be better without them. Take care x

{{Chris}} Families can be so frustrating. But, it's probably better that this is the way they're manifesting it. They could have decided to stage a scene at the wedding (my Mother-in-Law is famous for this) as it is they won't have nearly the impact they expect.

it's their loss - and all the more food and drink for the rest of us.

That's what we used to tell our son who hated shrimp: "OK, that's more for us"

I'll be thinking of Elle (and you) all weekend. And it won't have ANYTHING to do with my envy of her honeymoon in Hawaii (3 weeks!!) -- NO, I don't envy her at all.

Hugs and kisses to you both!

You can't choose your families. I'm sorry Toyboy Truckers hurt but it's their loss ultimately.
Have a wonderful time
x

Pat - thanks so much - and it's stupid to stress over people who obviously aren't worth stressing over!

Jan - thank you! Am much calmer now - and yes, the "real" family will be all around on the day I'm sure! I can't imagine my mum and dad - not to mention Pat - wanting to miss a party!

Karen - thank you. I'm keeping everything crossed too!

Mummy - thanks so much - have now accepted that the family who don't want to be there because they're small-minded etc etc will be the losers - not the rest of us.

katiebird - wise words! thank you! We'll have a brilliant time WITHOUT them!

Gonna be a writer - true - the people who want to be there are our "true family" - so ya-boo-sucks to the rest of 'em!

Can't wait to hear how the wedding went. Do hope you all had a lovely, lovely day - despite the 'outlaws'. xx

Olivia - thanks so much! I'll certainly be posting about how it went!

The Write Woman - hope you had a fantastic holiday - will be off to check your blog for full details! Will probably bore everyone rigid with the wedding posts after The Day!!!