I'm On The Telly! 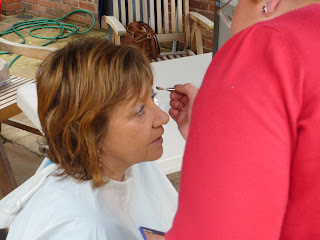 No, I knew I wouldn't be able to keep quiet about this any longer - so here we are - no blog posts for weeks and now two in one day.... Well, at last I can come clean about what I've been doing. Huge bragging moment coming up... Last week I was on location in deepest beautiful rural and exclusive Cheshire, filming three television adverts for The Writers Bureau 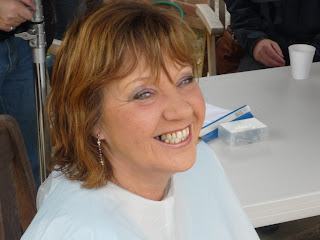 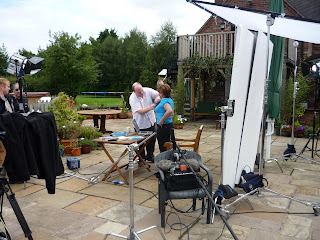 It was absolutely brilliant!!!! After last year's hoo-ha with the Advertising Standards Agency (who thought I shouldn't be in the WB adverts because I wasn't a genuine ex-student - I am! - and couldn't be called a best-seller because my books, while appearing in lots of best-seller charts, had never appeared in the Sunday Times - but who have now agreed that I can be called "award-winning") and the damning mention in that article in The Times about the WB and me being a gurning non-entity - my paraphrasing by the way - I wondered if the WB would ever use me to publicise their wonderful distance learning writing course again. But they did and have - and I LOVED every minute of it. 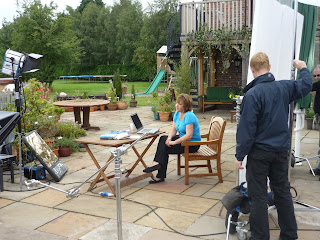 The adverts (two 30 second ones and one 60 second) will be aired from the autumn on terrestrial and satellite TV stations as well as having a You Tube slot, and will run for at least 18 months. And of course it was fantastic reciprocal publicity as the ads will feature all my books as well as extolling the virtues of the WB course.

I've just dotted the photos about on the blog - I think they're fairly self-explanatory - and hopefully they'll give some idea of what it was like. 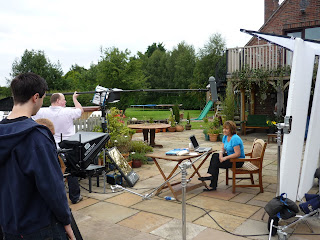 The film crew were amazing - especially given that I'm a giddy amateur - and were very patient and made it all wonderfully easy. And I had a proper screen make-up session and my hair was all gussied-up by the lovely Debra (an award winning make-up artist who works with Very Famous Film and Telly People), and I was wired for sound and had three scripts (and a blissfully easy auto cue!) and still managed to not be able to walk, talk, look at a book, sit down, smile, read lines and type at the same time... Duh! 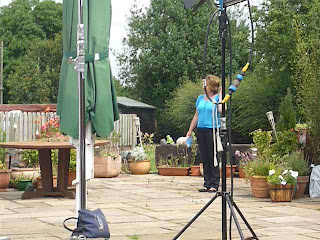 We arrived at the farmhouse location (they filmed in the very pretty courtyard garden and the weather was perfect) at 10 a.m. and left again at 5.30 p.m. All that time to shoot three little adverts!!! So many takes - so many things (for me) to get wrong.... But no-one seemed to mind and we even had a proper chuck-wagon roll up for lunch time like Real Filming - and I can't remember ever laughing so much for so long. 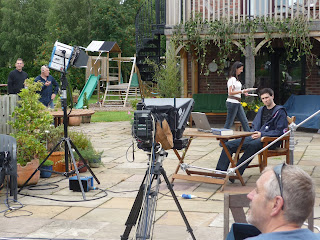 And mindful of the fact that the camera adds POUNDS I'd crash dieted (not to be recommended) for 2 weeks beforehand and lost 14lbs in 14 days (two Slim Fast Shakes and a Weight Watchers soup - 600 cals per day) but still looked billowy on screen... Now realise that those really thin people you see on TV must be Really Really Really Thin in real life. 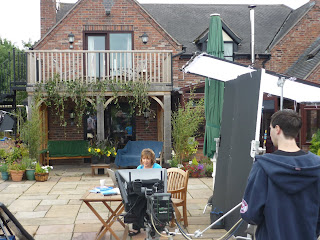 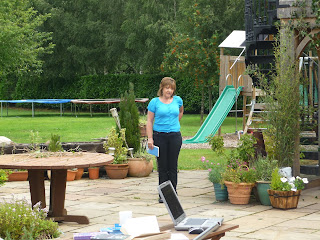 At the moment all the ads are being edited and cut and sliced and spliced (or whatever the technical terms are) and I've been promised that I'll get a preview as soon as they're ready - and that's going to be the really scary bit... Still, right now, I'm back home and still floating with the glamour and excitement of it all. So -a huge THANK YOU to The Writers Bureau for being brilliant hosts and friends and for giving me not only this fantastic opportunity and experience but also such a magical time Oop North - and I truly hope I didn't let you down.
Posted by Christina Jones at 12:08

O-M-G How Exciting!!! What a fantastic opportunity for you, and very well deserved, as you say, after all the crap that went on before. Please let us know when the ads are going to be on! I'm going to get all my friends and family glued to the Telly!!

Olivia - thank you! I'm still beaming - I had such a great time! Will definitely let EVERYONE know when the ads go out - I think...

Ooh, Chris, how wonderful. And you just have to use the experience as the basis for a book.

Jan - thank you so much - it was a fabulous experience. And, as ever, it WILL get used somehow, somewhere, someday...

WOW how fabulous! Can't wait to see you on the tv.

I've had Ma staying here all weekend (left to go to godmothers 5 mins ago) I wish I'd shown her this before she left.

Blimey, that IS exciting - I'm green with envy :o)

It's funny because years ago (I won't say how many!) I signed up to do the WB course, impressed that they'd produced a "proper" author, having read a couple of your early novels. It was a great kick-start for my writing - I sold a couple of articles. It completely went to my head and I didn't complete the course, but I'm glad they're still going - and keeping you in the advert!

Karen - thanks so much! And how weird that you signed up for the WB course because of the ad/me being published - and now we're mates!!! So glad it kick-started your writing career even if you're now loads funnier than me - grrr.... And whisper this - I didn't finish the course either... And the best bit of the whole day was having the make-up on and discovering that it sort of polyfillas your face so I had NO wrinkles or anything... I didn't wash it off for TWO days afterwards...

Lovely to catch up with two blogs from you and all your news/ That's a gorgeous photo of you smiling at the camera - you have such a lovely, happy smile.

ChrisH - thank you! That's apparently not a smile - that's a gurn!!!! Actually I beamed all the time because I was so excited... well, it was far cry from Life On The Estate...

Oh, Chris, how fab! Philly is thrilled to bits, too. One in the eye for Satnav - if he was bothered, of course!

Lesley - thank you so much - and the lovely Philly too of course. I did enjoy myself - and yes, it would be LOVELY to think Satnav was just a little bit miffed....

So thrilled you had such a great time. I had everything crossed for the weather so you could film outside. You look fab. Can't wait to see the ads!

Mags - thanks so much! Your finger crossing worked because the weather was glorious all week and only rained at night despite me taking TWO macs because it was Manchester....

Wow! How exciting. Let us know when we can see the finished ads. Blimey, how posh. As for the dieting, how did you manage that??? I feel faint just thinking about it.

Thanks too for the much needed reminder that I really *must* get my act together and finish my WB course!

Can't wait to see the ads!

Fantastic news - will have to look for it as soon as it is out! Great news about MF as well - still keepig an eye out for an email containing an odd question!! LOL

Good news and bad news for me - good new is that they now know what my lump is - bad news is it is a cyst the size of a golf ball on my one remaining ovary! DOH. Oh well, on the bright side, if they have to remove it, I will not have to worry about contraception!

Off to play on my farm on facebook now. Anyone else on there?

Shirley - thank you! Funny you mentioning the posh word because they kept telling me to "stop talking posh!" - as I've got a very broad Berkshire accent and sound like Pam Ayres I was SO chuffed! And the diet was necessary and still not enough - I just stopped thinking about food. However I've put on 5lbs since!!!!

Susan - thanks so much! I had such a lovely time - and hope you're enjoying the WB course - I loved it when I did it.

Alzamina - so sorry about the lump. Glad it's a cyst though. I had one of those!!! Better out than in as they say - and glad you're looking on the bright side - hah! I had a hysterectomy before I was 30 and I always say I've been on HRT since puberty!!! The Toyboy Trucker has a Facebook Farm too - so far I've resisted the temptation....

Wow! Go you! I did the WB course for a while - I might even finish it one day but I doubt it.

Hooray to you and ya-boo sucks to you-know-who. I'm glad you had such a great time!

Gonna be a Writer - thank you! Funny how many of us are ex-WB-ers isn't it? I never finished the course either...

Liz - thanks so much! Yes, I admit I had a few little smirks thinking of you-know-who as I gurned at the cameras.... Hah! The sweetest revenge???

Very exciting and am sure you will look fab. Can't wait to see the ads.

Wow - you're a star! Looking forward to seeing the finished product. Your WB testimony persuaded me to sign up for the course, several years ago. (I neve finished it, but it did get me started with writing and taught me a lot of useful stuff.)

This doesn't have much to really do with the post... but have just seen the cover of Moonshine on the Little Brown website, it looks FANTASTIC, can't wait until it's out. Best of luck with it, hope you're drowning in royalties.

How absolutely fabulous Chris! I'm doing the WB course but have to admit to dragging my heels of late - it ain't easy with three kids, a hubby and a part time job... but I'm feeling newly inspired. Can't wait to see you on tv xx

Tam - thank you - I just hope I look and sound better than I think I did...

Womag - thanks so much. I was SO overexcited by it all. Funny how many people have done the WB course and it got them started - even if they didn't finish it - but can't believe YOU did it because of ME!!! And now here we are as friends. Ain't life odd???

Indie Chick - thanks a million. I LOVE the Moonshine cover and really, really hope it does okay. As to the royalties - oooh, yes - well, a girl can dream????

Lindsey - oh good luck with the course - I know life gets in the way of writing ANYTHING - but at least you can work at your own pace. So glad you're feeling inspired - this morning, I'm not!