I Wanna Be A Girlie Girl 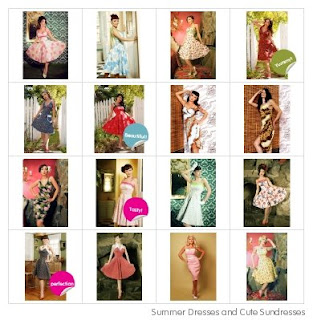 In the late spring of 2007 I decided I was going to "go into frocks". The late spring of 2007 was HOT. I fondly imagined that months of warm summer weather stretched ahead. I also fondly imagined that I could look sweet and feminine. I'm not and never have been either of those things, and since becoming a Real Writer and thrilled to not have to wear tights-to-the-office have lived in jeans/trousers/cut-offs. Anyway, frocks were always something that looked good on Other People. I wasn't girlie enough - but that could and would change... Inspired by two things (apart from the lure of a hot summer) - Judy Astley's incredible frock wardrobe and that line in Aretha's Say A Little Prayer - "...while wondering which dress to wear..." which always conjures up such a pretty image and makes me very jealous - I bought four frocks.

The summer of 2007 was wet. Very, very wet. We were flooded for most of it. The frocks stayed in the wardrobe and I lived in jeans-tucked-into-wellies and a cagoule. However, come the following spring, thinking that the summer of 2008 had to be better, I bought another four frocks. The summer of 2008, as you may well remember, was even wetter and windier and colder. I lived in jeans-tucked-into wellies and three jumpers and a cagoule. Eight frocks now hung prettily in my wardrobe.

So, this year, three summers on, and being promised a heatwave that would split the pavements, I bought two more. And yep, all ten of them now hang in the wardrobe in all their gorgeous, colourful, floaty, floral glory. Unworn. But not unstroked. I sigh happily over them on a daily basis. And I'm still in jeans and wellies.

So? If I was the proper girlie girl I long to be, would I have worn the frocks for the last three summers regardless of the Noah/Ark/monsoon conditions? If we have a burst of late heat will I ever rescue them from the wardrobe and wear them with pride? Or is it too late for me? Have I had too many years of comfortably "dressing like a bloke" as The Toyboy Trucker once helpfully said? Will I actually feel (as I fear) like a drag queen or one of those Disney dancing hippos if I ever abandon the jeans/trousers and pull on a frock at last?

Rain is pouring from a leaden sky as I write this. We're already into August. I'm typing wearing jeans and a big sweat-shirt. The frocks, I fear, will moulder for at least another 10 months. So - maybe next summer...?
Posted by Christina Jones at 10:04

I'm SO with you on this, Chris! Like you, since giving up the day job I have lived in jeans, cropped trousers or (on the occasional warm day) shorts - knee length ones of course, I don't go around exposing too much these days! For the two daughters' weddings last year, of course, I Dressed Up, and enjoyed it. And in my wardrobe, now, are two summer skirts and a dress - unworn. I feel guilty whenever I look at them. They were real bargains, but even so! When we go out anywhere, I take one of them out of the wardrobe, planning to wear it - look at the weather, and put it back, in favour of my jeans. Or is it just that I really feel overdressed, now, in skirts or dresses, for anything except weddings? xx

Hi Christine! I love this story. But, you're missing an OBVIOUS opportunity. Home-Fashion-Shows. A couple of times a year set aside an hour or two and show them off to the Toy Boy Trucker. Play around with make up and shoes too....

And/Or wear them for "work" outfits just in the house.

I wish we could see photos of them.

(I'm sorry I disappeared for your last couple of posts but, my mom had emergency surgery -now in a rehab hospital - and my dad is getting ready to travel out of state -with me- for a surgical procedure. So things have been crazy-wild and I'm not writing much online these days. I hope things get back to normal soon.)

Write Woman - YESSSS! That's me exactly. Even when we go out for a meal of a Friday night I think I might wear a frock - then I think "it's only local and I'll feel/look overdressed and silly" so I don't! My frocks were cheap too (naturally) but I feel guilty that I bought them (and have even added little lacy shrugs in matching colours to some of them) and will probably never wear them. Tomorrow night we're going to the theatre in Oxford. Now, years ago I'd have Dressed Up for the theatre - but no-one does that any more - so it won't be a frock night - it'll be the black trousers - again...

katiebird - oh I'm so sorry that you've been going through such a tough time. Am sending you lots of love and cyber hugs and hope that both your parents recover really, really soon. You poor thing. Ah, yes - and maybe I'll do the Home Fashion Show - but I bet you HE'll laugh at me in a frock!!!!

You reminded me of this post from another excellent local blogess, so I just thought I'd mention it.

I adore frocks, but I'm the wrong shape for most, all "Bust & back-end".
but I do have a few. I work from home and I live down a lane, so sometimes the 'frock urge' is too much and that's when I'm seen taking the dog for a walk in Wellies and frock, the locals are used to it now, and don't bat an eye lid.
I just have to say I've ordered your new book Moonshine,I'ts going to be "1 to 3 weeks delivery" , but I'm soo excited, and so worth the wait.

I know exactly where you're coming from. I occasionally buy frocks and am sure I'll wear them and sometimes even put them on, but invariably end up changing into (usually black linen) trousers before actually leaving the house.

I was looking at someone today, looking very cool and floaty in a pretty cotton dress and flat shoes, and thought how wonderful she looked. Maybe one day.

Oranjepan - hello - I'm so glad you've found me too! And thanks for the other blog mention - love it! - and now I've got yet another blog to visit regularly. And in Berkshire too - so close!!!

CrazyJaneDesigns - thats me too - all bust and bum! Think dog-walking in frock and wellies sounds very posh. Wouldn't get away with that here on the estate (that's as in council, not moated and gated with peacocks) sadly. THANK YOU so much for ordering Moonshine - I saw there was a delay on Amazon, and I'm guessing it's because it's the hardback with only a small print run - publishers will be saving the big guns for the paperback in January - so THANK YOU again. Oh god, I hope you like it... Gulp...

Debs - I can really "see" you in a frock, but know exactly what you mean. They always look so lovely on Other People - flat shoes and floaty florals sounds perfect - but yep, tonight I've been out in the black trousers and a silky top even though it's quite warm and I could have worn a frock. Ah yes - maybe one day...

a dress is the new jeans - wear it anywhere anytime. u go girl.

I think my jeans must be welded to my bum. I open the cupboard, think what to wear? and pull out a pair of jeans. Sometimes dark, sometimes faded, sometimes cropped, maybe black ones in the winter, but always jeans.

I think we need to declare a national women writers' dress-wearing day.

I love wearing frocks but like so many of us girlies we don't wear them often enough.... I live in a small village so to dress in a frock would raise eyebrows and cause fellow villagers to wonder where I was going!! Keep up the great work Christina... thanks for your emails last night, very helpful ;0)

just to let you know, amazon said 1 to 3 weeks, well, I got it on Wednesday, so only a couple of days in reality, and I'm loving it. I usually wait for the paperback , but for you I can't wait!!

I'd love to think that the locals think I'm posh, but fortunately they know me, so they just smile, that knowing" there's that mad bat" smile. or the usual " oh she's 'artistic'" comment. bless em.

LOL - Cracking - I'm not the only one to be seen in wellies and frock!!

Have also been seen on my OH's farm wearing skirt and boots whilst mucking out the horses and cows :-), spend most of my free time in jeans and strappy tops.

Can't wear skirts or frocks at work tho - all that bending over and being on my hands and knees.......would be like a total eclipse in the kitchen - although I do have 3 1/2 " heels on my work boots!!!


Have also ordered Moonshine, shame won't be here before my hols!!

I've got a couple of frocks lurking in the wardrobe.

I imagine myself looking winsome in something long and floaty with one of those thin cardigans over the top, but the reality includes a tummy I never quite know what to do with.

I've tried wearing Spanx underneath but end up feeling as if my internal organs have been rearranged. Sigh.

YAY - finally got moonshine- big mistake opening it before hols - demolished in a childfree afternoon!

Great book - found the excerpt from Happy Birthday in the back a bit odd and oops - there is a spelling mistake on the rear flap of the dust cover! Heaven Scent instead of Sent!!!

I love 'frocks' although I think I looked much better and more delicate when I was heavily pregnant! Now I've given birth, I feel rather clumpy, lumpy and unfeminine! On the upside, my copy of Moonshine has just dropped through the door so I can relax (ha, with two children - doesn't happen!) and read with a nice coffee and cakey.

kate 1952 - funny you should mention 27 Dresses as I'm forcing the Toyboy Trucker to watch it after he made me sit through 2+ hours of Insufferable Basterds (sp???) at the weekend - eeeech!!!!
And I wore TWO dresses on my hols (not at the same time) - so I'm breaking out!!!

womag - oh, I'm so glad it's not just me. A Woman Writers Dress Wearing Day sounds pretty good to me!

Sue - you're more than welcome! And yep, here wearing a dress would make everyone assume you were going to court (and not regally)...

CrazyJaneDesigns - oh, thank you!!! Can't believe anyone would pay that much for one of mine - but THANK YOU. And so glad you like it - how awful would it be if you thought it was a total waste of money??? Ah, yes - "mad old bat" could translate as "creative" I suppose. Must try it sometime...

Alzamina - thanks so much for ordering Moonshine - do hope you'll like it... And laughed at the thought of you in working-frock-mode. High-heeled wellies????
Ah - just found your 2nd post. Oh - whoopee! You liked it! No, no idea why they chucked the opening of Happy Birthday in there - why not the opening to Midnight Feast? And I haven't looked at it so didn't notice the typo...

Karen - yeah, it's the image going awry that's the problem, isn't it? I always think I'll look okay and then I don't. I just look like a big bird in tight clothes. I've done the Magic Knickers thing with the same results plus a huge wodge of excess me under my ribs. Not a good look.

Claire - thanks so much for buying Moonshine. Really hope you'll like it (she says nervously). Oh, I always feel like a badly wrapped parcel in anything - especially anything girlie... Thanks so much for letting me know I'm not alone.