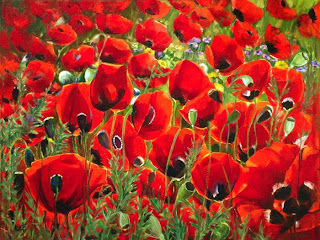 Really no need for words. Just the picture and thoughts. Remembrance Day seems even more poignant today somehow. War is no longer something sadly remembered by the older generation. It's now horribly real for everyone. We're on the flight path for both RAF Brize Norton (where the bodies of the servicemen lost in Iraq were repatriated) and RAF Lyneham (where the Afghan dead are now flown) and the sight and sound of those low-flying Hercules on their heart-breaking mission is truly harrowing.

I held my own two minute silence at 11 just now - in the garden - and it was made even more poignant by the nearby army base sounding the eerie WW11 air-raid siren, and the local infant school getting all the children into the playground, and their excited laughter dying away on the first stroke of eleven o'clock until all I could hear was - nothing. Absolute silence. Very, very moving.
Posted by Christina Jones at 11:24

Rememberance Day (or Armastice Day if you want to be really picky!) is well honoured in our house. We have an ex tank driver (Tank Regiment) and an ex rockape (RAF Regiment) in our family, both having served in conflicts in the 80's and 90's. Also, as we do educational talks for both WW1 and WW2, even my 6 year old son in conversant with the meaning behind the poppy - often to his teachers suprise!!

How chilling to hear the siren, then the silence, and to have those planes overhead bringing back those poor souls.

It's so important that people remember.

You have balanced the horrible reality with some beautiful phrasing. A personal tribute from the heart.

I was on my own at 11 and I helg my own silence too. Couldn't help but feel moved by it.

You have made my skin tingle thinking of the silent children and those on their final journey home. Your post like the silence -very moving and so very sad.

alzamina - that's wonderful. And even more so that your son knows about the poppy's significance.

debs - it's truly awful. The siren made me shiver - but the planes always make me cry.

Jan - agree. Especially now that the WW veterans are dying out.

Theresa - thank you. So very sad.

Wow. Christina, that brought a tear to my eye. Thank you.

katiebird - such a sad time, but we must never forget.