That's The Way To Do It 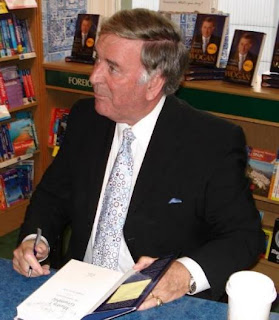 Well - I've just come back from a book signing session. At The Bookstore. In our little market town. And there were thousands of people there. Thousands - honestly. Before I'd even crossed the road to head for the precinct, someone said "I shouldn't bother, duck - they'm queuing, six deep, way past Nat West..."

And they were. I've never seen so many people in one place in my entire life - well, apart from football matches and rock concerts of course - but for a book signing in the indie Bookstore, in our tiny, tiny town...

Sadly, they weren't queuing for an early signed copy of Moonshine. No, they were there for Terry Wogan. And so was I.

What a coup for The Bookstore! Sir Tel - in person.

As The Toyboy Trucker is also a huge fan I joined the throng, prepared to wait for hours to get the hallowed signature for one of his Christmas presents. And it was one heck of a wait - TOGS, TYGS and all those in-between were determined to see TW no matter how long it took. Terry had dragged out a huge cross-section of the community (some of whom possibly haven't seen the light of day since 1955) but I was surprised that it wasn't just one huge beige army - no way. There were also schoolchildren, and dreadlocks, and suits-and-boots, and young mums and well, everyone...

Eventually I made it to the front of the queue, shared a few nervously giggled words with "the veteran broadcaster", had the book suitably inscribed, and, completely star-struck, skipped out into the still-crowded precinct. Oh, but what a lovely man. Truly. Everyone was treated as an individual, he had time to listen and chat and laugh and be photographed, and no lengthy inscription was too much trouble.

Terry Wogan is a true gentleman. Warm, polite, amusing, unassuming, genuinely interested in everyone and everything. When Jane and Ian at The Bookstore said that his allotted hour was up but the crowd was still weaving its way out of sight, he said it didn't matter, he was staying until the queue was gone. And he did. For hours and hours.

What a star! So many of today's so-called celebs could learn so much from him. No histrionics, no demands, no hint of self-importance - just well-mannered, old-fashioned friendliness, dignity and decency.

But - oooh, if only my next book signing ( Moonshine - January 16th 2010 - sorry, gratuitous self-promo moment!) in The Bookstore could be a millionth as well-attended....
Posted by Christina Jones at 11:16

How nice to hear, for a change, that a celeb was so pleasant and generous with his time, Chris! I wonder what happens to those who become all diva-like and obnoxious on the way up? It obviously doesn't happen to everyone. I mean to say, look at us (!) - signing books ourselves (humph! occasionally, if I can bully shops into it!) - and we're still such lovely people, aren't we - obviously completely prepared to spend hours chatting to our long queues of fans ... Yes, well. Just having a little dream, there!!

Sure you will have a good queue yourself in January. xx

Sir Tel is a legend, it's so good to hear he actually is that nice in person too.

I'm sure you'll have a brilliant queue in January.x

It's so heartwarming to hear about someone being just as lovely in person as you always imagine (hope) they'll be.

He always struck me as a decent bloke and I guess I was right. Good luck with your own book signing.

oohhh - so jealous - meeting Sir Tel of Togs! Used to love listening to his breakfast show

Where are you doing your signing? Somewhere way on down in the deep south ;oD are you 'going on tour' at any point for signings? Will be there with my flask of coffee, tent and pile of books! LOL

Not been on for a while as my 6 year old son (of embarrassing comments fame)was admitted to hospital with Pleurosy - have had about 30 mins sleep over 48 hours and am buzzing on diet coke!! Did use the time to read may fave 2 books of Going the Distance and Jumping to Conclusions though!

Have you got a tentative release date for TWTAWH yet? Getting withdrawal symptoms - hehe

Olivia - thanks and I loved the shared signing dream... Me too - oh, if only... I can get a decent (ish) crowd with friends and neighbours and the lonely people who are always attracted by balloons but that's about it. But Sir Tel was simply a gent and a legend and genuinely lovely so he deserved his queue...

Colette - me too and I was so pleased to be proved right - for once. Thanks for the good wishes for my own rather more sedate signing....

Teresa - oh I agree. I'd have been gutted if he'd been all starry and obnoxious - but he wasn't!!!!

alzamina - poor you and the child! Hope you're both feeling better now. Book signings so far in Deep South - book tour??? Not a chance - you have to be JKR or - er - Terry Wogan for that sort of thing. Am in Middlesborough libraries in June though! Ooop North! Hooray!

oooh sir terry eh? Get you hob nobbing with the rich and famous! Nice to hear he's decent chappie :) xx

Jayne - oooh I'll hob-nob with anyone, you know me! And yes, he was. Very.