Romantic Novel of The Year Award - ooh and Happy Christmas! 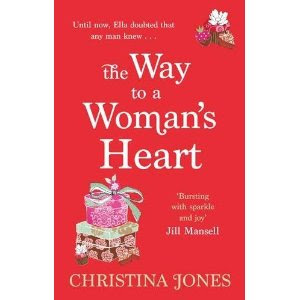 I've just had the best early Christmas present ever - the news that The Way To A Woman's Heart has been long-listed for the prestigious Romantic Novel of The Year Award. Stunned? I'm speechless. The short-list will be announced in February and I'm pretty certain TWTAWH won't be on it (believe me, there are some really big-hitters on that long-list) BUT just to be nominated is absolutely amazing. I've just skimmed back over the blog posts I wrote while - um - crafting TWTAWH and have decided that, with hindsight and a completed book, all that - um - crafting was well worth it in the long run...

We've had a weird few weeks - it's all been a bit Hotel Babylon here with our usual influx of pre-festive visitors - and some lovely but disruptive winter weather. One lot of visitors, due to arrive at Southampton airport at 9 a.m. eventually, after several re-routes, ended up at Gatwick at midnight. The Toyboy Trucker who was collecting them spent a hairy day and night battling through snow, ice and freezing fog as he hopefully toured the UK's airports. The restaurant get-together was eventually cancelled at about 11 p.m and we all had weary fish and chips in the early hours and minus 10 degree temperatures.

And sadly, my lovely brave one-eyed Maddy cat died suddenly. We were devastated. She'd done so well and had such a happy and lively few months since her operation and had loved being a Diva Cat and spoiled rotten. Her death was as peaceful and gentle as her life - she hadn't shown any signs of being ill at all, and had curled up after her supper on her blanket under her favourite radiator and simply went to sleep. We found her the next morning looking as though she was still sleeping. A fantastic end for her - sheer, total, heartbreaking hell for us. RIP my Mad-Mad Maddy - I'll always love and miss you.

So - two days before Christmas, we're still up to our fetlocks in snow here, it looks gorgeously Winter Wonderland outside, The Toyboy Trucker will be home on Christmas Eve, I've packed all the Christmas stockings, and have stopped writing Never Can Say Goodbye until after the festivities. With the other residents of the terrace and Elle and The Doctor we're looking forward to a very happy Christmas and an awful lot of peace on earth.

So, Happy Christmas to all Bucolic Frolickers - thank you so much for all your support and brilliant friendship - and I hope you all have the Christmas you've dreamed of.

See you next year!
Posted by Christina Jones at 09:57

How lovely to be nominated! Let's hope you get to the short short list. I've put the book on my Christmas wish list.

Seasons greetings to you and all yours Chris, May love, hope, health and happiness follow you all.

Good news about the book - where do we vote?!?

Morton - thank you so much! I really, really hope you'll like TWTAWH if it appears via Santa. And a very, very happy Christmas and a great New Year to you too. Cxxx

alzamina - a very happy Christmas to you and yours too - and many thanks for all your help and friendship in 2010. Sadly there isn't any public voting - the long-list will be whittled down to the short-list by a committee... Cxxx

Sorry to hear about your cat. But congratulations on the long-listing!

Merry Christmas to you and yours.

So sad about Maddy :o(

Fab news about the nomination though - fingers crossed for the short list - and very best wishes for 2011.

Claire - Thanks so much (I can do the cakey dead easily - the creativity might give me more probs...) and - um - I dunno why TWTAWH isn't available in hardback on Amazon. Sorry. Sold out???? Ooooh, I wish! Cx

womag - many thank yous on both counts. And I hope 2011 brings you everything you want it to. Cx

Karen - thank you so much. Life full of ups and downs,eh? Wishing you all love, health, wealth, luck and happiness in 2011. Cx