I Could Have Danced All Night 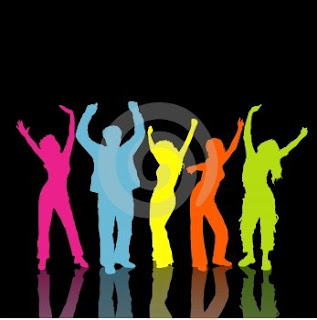 Started writing this earlier then got sidetracked by writing Moonshine all week (going okay - I don't love it but I haven't deleted any of it - YET) but have now been snowed in for 48 hours and am going stir crazy. I LOVE snow - but we've had it for five days and now we can't even get out of the house and the little single track roads round here are impassable and today the entire Oxfordshire section of the A34 has been closed by the police, so we're marooned...

So, I thought I'd finish this blog post about last weekend's Big Night Out - The Toyboy Trucker's firm's dinner-dance - because it did throw up a rather wonderful writerly event.

First though, the whole swish "do" was amazing - the way only a company's swish "do" can be when most of the invitees aren't used to doing swish...

I loved it! We were all installed overnight in the utterly decadent Millennium Hotel -all opulent gold and cream and acres of glass (we had a bedroom big enough to live in for a year without ever getting in each other's way), with miles of silent, immaculate, spacious corridors and very friendly and helpful staff. It was funny, really, the way we all went around after checking in, mouths agape, staring in awe at the splendour like Dorothy when she first got to Oz. And everyone belted off to see A&B's twin room which had two sunken spa baths!!! We really were Hicks from the Sticks R Us...

The evening venue was the Jazz Cafe - somewhere I'd never been before but will definitely visit again for a superb night out. The food was wonderful, the drink flowed courtesy of the company and they had a live soul/jazz/funk/fusion band (I only know about the fusion bit because Elle explained it to me when we got home) playing stuff I knew and recognised (a tricky area when you get to A Certain Age and make only rare visits to nightclubs, I find...) and could dance to.

There were drawbacks of course. I went all dolled up (it said "dress to impress" on the invite) and was pretty happy with my long and flowing purple frock and purple glittery sandals, plus new hair-do (short now - but not as short as the Disaster Cut some of you may remember I had a couple of years ago when Elle's friend offered to do it at home, and she'd just had her elderly beloved dog put to sleep and she cried all through the snipping and I cried with her and neither of us could see what she was doing and I ended up with bristles) and carefully applied slap when we left the hotel. On arrival at the Jazz Cafe and meeting up with the other departments it was abundantly clear that I am now firmly - whatever I may think - in the "matronly" department. The majority of the company's female staff were in size 6 LBDs and stilt heels and looked like Girls Aloud... I felt soooo old....

However, I've got stamina, and I threw myself into the jollies and danced a lot of them young 'uns off the floor (I always knew those years of being a bump-and-grind nightclub cage dancer would come in handy one day). The Toyboy Trucker, it must be said here, doesn't dance. Can't dance/won't dance. He'll stand and sway if absolutely necessary but then only when very, very drunk...

But as I said at the start of this, the main point of posting (apart from being able to boast that for one glorious night my life didn't revolve entirely around the computer in the spare bedroom, worrying about money, fretting over deadlines, the cats, the madness of the estate, and spending most of my time in my PJs) about our Big Night Out is actually a writerly one. Well sort of.

The evening provided yet another of those "I know I shouldn't be thinking this right now but it'd make a bloody good plot" moments. Oh, not quite on the lines of the P&S&S's wife triangle that I was faced with at the last party (neither P nor S were at the Jazz Cafe thank heavens!) - but fascinating none-the-less - and something I knew I'd have to share.

I'll call the trucker Dave because that honestly isn't his name. Dave is in his 30s and single. It soon became apparent that several of the girls (all pretty petite blondes in gorgeous frocks) were watching the door of the Jazz Cafe and constantly checking their mobiles for text messages. It also soon became apparent to anyone with half an ear (me, nosy, listening-in) that they were all waiting for Dave.

Now Dave is a mate of The Toyboy Trucker's and I knew he had cried off at the last minute due to "family problems". Being a cynical old bat, I quickly guessed that the problems were far closer to hand. All Dave's ladies were in the same place at the same time - and none of them knew about the others.

As the wine flowed, and tearful visits to the loo were made, and sobbing confessions emerged, the girls gradually realised they all had something (or someone) in common, and weren't, as they'd fondly imagined, Dave's one and only. Cries of "but he told me he loved me!!!" echoed all around our table. Dave, it appeared, really managed to keep all these ladies happy and apart - until the Big Night Out..

Of course, if he'd turned up, it would have been much more fun (well, for me) although possibly not for the ladies involved or for Dave who might have been lucky to escape with his bits intact. You had to admire his tactics though. He'd managed to keep all these girls happy for several months (years in one case!), by spending a couple of nights a week with each and blaming his frequent absences on - well - trucking.

What the other men in the party found so totally confusing was how he'd managed to do it. Oh, not keeping the girls apart which is fairly easy when you're out on the road all the time, but getting them in the first place. They were mystified and not a little jealous.

"I just don't understand it," The Toyboy Trucker's boss said to me as he peeled yet another glamorous sobbing blonde from his tux. "Dave's a nice bloke, but he's just - well - a bloke. He's not Brad Pitt. He's got no money to speak of. He's got loads of baggage. He's nothing special. What on earth do they see in him?"

And I smiled and shrugged in a mysterious (hopefully) womanly way. Because I knew very well. Because I'm a woman. Dave is average height, average build, average looks. But he's charming. He's also got a fabulous smile and beautiful eyes. And he's intelligent, articulate, compassionate, very funny and gentle. He makes you feel as though you're the only person in the world when he talks to you. He remembers everything about you, is genuinely interested in you, can make you laugh, and can not only talk but also listen. Dave is, without doubt, one of the most charming men I've ever met.

As a happily married woman, I'm immune to the charm, but yes, I can completely understand how he managed to get all these lovely girls to fall in love with him.

Yes, of course, he's a bit of a rat. But then he hadn't promised them anything other than fun. He'd never made any sort of offer of a permanent relationship, or told them they were his one and only. And I'm sure he was being honest when he said he loved them. Love the one you're with should be (and probably is) his motto!

Dave is, I realised during The Big Night Out, perfect romantic hero material. Flawed, but ultimately redeemable by the heroine. It will be such a coup for the lady who eventually does make him fall properly in love and manage to curb his philandering ways... And yes, I did have one particular candidate in mind for my perfect romantic heroine - she'll be just right for him... (I do hope one day Dave will realise it too).

All this, of course, I kept to myself last Saturday night, as it would have been no comfort whatsoever to the bevvy of broken-hearted beautiful blondes, each one of whom had a sumptuous room and a superb king-sized bed, revved-up and waiting for Dave... The Invisible Love Rat or Perfect Romantic Hero????
Posted by Christina Jones at 10:04

Cripes, is Dave still alive now or have the bevy of blondes joined forces to exact revenge?! He sounds lovely, if only he stuck to one and the perfect hero ripe for the picking. And I bet his ultimate heroine will turn out not to be a petite blonde!!

Great news about Moonshine. I'm glad one of us is making progress. Good luck.

Dave sounds utterly fab, and definately intelligent, given that he chose to make his excuses and not attend the party.

I can't imagine you looking matronly at all. I'm sure you looked stunning.

Well done on the progress with Moonshine, can't wait to read it.

Mags - no, Dave's still with us!!! And yes, my thinking exactly - his Special One certainly won't be tiny and blonde... And Moonshine doesn't feel/look as if it's progressing - I seem to be writing for hours and think I've done about 10,000 words and find it's less than 800!!! Good luck with yours - we WILL do this....

Debs - hmmm, agree totally - but then you're not averse to falling in love with a Bad Boy yourself, are you??? Good luck with your travel to UK tomorrow - weather forecast is terrible (hope this one is wrong) -and please keep safe.

Wow, Chris -- I've never been so completely snowed in. Around here a heavy snow is always followed by a Big Melt so we never see all that much for all that long.

That party sounds wonderful (and your outfit stunning -- I've nothing against a pretty LBD but, how boring if EVERYONE is wearing it)

When you write about Moonshine I just want to reach my hand out and say, "I'm sure it's fine -- hand it over." I'm that anxious to have it in my hands! I'm kidding (sort of)

Oh, the Dave thing. Did ALL the girls get rooms for the night? Or did they have to share Dave's?

katiebird - I PROMISE that Moonshine will be a Real Book very, very soon (I hope).... Thanks so much for your support - much appreciated. Dave's girls had ALL booked into double rooms in the hope they'd be sharing with Dave... Such a waste!!! And the snow is melting as I type - BUT we've just been given a severe weather warning for Oxfordshire for later today - gales, blizzards and another 20cm of snow - sigh...

ROFL!!! I bet Dave's mobile has been switched off since the big night! I hope he finds someone more suitable to make him happy :) I'm sure your dress looked fantastic.

We've not had much in the way of snow here really. Even so, I've had enough of the bit we have got now. Roll on Spring!

mummy - I'm fed up with the snow now. It's not even pretty any more. And we're supposed to have a blizzard tonight - which, if it happens, will make things pretty again but will give me even more cabin fever... According to TTT, Dave is totally unfazed and unrepentent apparently - and is happily contacting all his ladies offering to "take them out for a meal to explain" - and I bet they all go - although obviously not together...