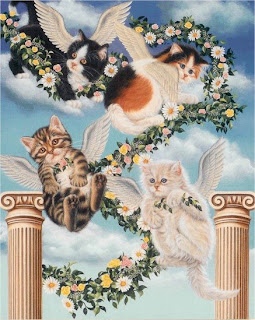 My life is a sort of jumble. I'd really, really like it to be like other people's lives - or at least have some semblance of organisation - but it just isn't... Oh, and the pic isn't at all relevant to this blog post but it's called Heaven Sent which I thought was great (I'd love to think my much-loved departed cats now had wings to help them with their butterfly-chasing, and gorgeous garlands to play with) and it makes it sort of writerly (with Heaven Sent being the title of one of my books), and also given my love of all things whimsical I just thought it was too beautiful not to share... See - I've already gone off at a tangent. That's my life - a mass of tangents - er, tangenti???


So - my life... I've quickly leaned that it's not like any other writer's life - or at least, not any writer that I've ever met. Not that I'm wanting to generalise here or go down the stereotype route - but, well, I live on an estate. And before you think "there's posh", this doesn't involve thirty seven acres, crenellated turrets, sweeping lawns, herds of deer, drawbridges and peasants - it means council.


Despite the best efforts of the tabloids to convince people otherwise, not all council estates are no-go areas or chav-ridden dens of violent iniquity. We've got our messier areas and more colorful residents, true, and no-one with any sense ventures near the municipal garages after dark, but on the whole ours is a nice estate. Built pre-war, it was apparently an experiment in rural living - sort of like a mini Welwyn Garden City - with little groups of houses built round green areas to create small villages. The entire estate was originally built on the site of a medieval castle, which means most of it is protected under various feudal laws - so we've got lots of these little communities built round the aforementioned sprawling village greens with spinneys full of mature trees and criss-crossing streams - and there are still bits of the old castle dotted around (we have parts of the moat and the keep beside our house). So, as well as being very green and attractive, it's a friendly villagey oasis in the middle of a rather pretty and old riverside market town. And yes, I use it in all my books...


The houses are a mixture of privately owned, privately rented and still council and no-one would know which was which. They're built of mellowed red brick - and each one is slightly different. Ours was one of the Tradesman's Houses. These were bigger and given lots of weird skew-whiff rooms and staircases to test the skills of the various bricklayers, carpenters, plumbers, glaziers and electricians. The result is a sort of miniature farmhouse effect, with steps up here and down there, loads of narrow corridors, dozens of windows in strange places, high-ceilinged rooms and odd awkward corners - and it's a bugger to clean!!! Not that I clean much as I'm a messy so-and-so. The Toyboy Trucker is always threatening to hire a cleaner but I couldn't have that! One, it would offend my socialist principles; two, I've been a cleaner and I loathed all my clients with a vengeance and I don't want to be loathed by anyone else; and three, it would mean I'd have to clean every nook and cranny before any poor cleaner could set foot in the house.

Being pre-war, all our houses have huge gardens and we all have a tree outside. Ours is an ancient and glorious eighty foot sycamore which is home to various birds, squirrels and occasionally Dexter. Em-next-door has a rowan tree which is supposed to keep witches away and clearly doesn't, while Vee has a flowering cherry. Anyway, I'm digressing again - the whole point of this post was to say that writers can and do come from every class and background, but I'm the only true blue collar writer I know... Lots of writers happily admit to working class backgrounds but now consider themselves middle-class - but I can honestly say that I know my place. I'm definitely one of the lower orders and happy to be there. I have no aspirations to haul myself away from my working class roots - well, face it, it's a council estate, I'm a barmaid, The Toyboy Trucker is a - um - lorry driver - so how much more working class can you get???

As well as Vee and Em, the other neighbours on our side of the green are also Quite Interesting (cue Stephen Fry?). Working from right to left along the terrace, there's Shaz and Dave and their five children from previous relationships; next to them there's Nikki and Memphis. Nikki works in the Eight til Late and Memphis is a roofer. They both wear loads of bling and have tattoos and diamonds in their teeth. Then there's Maudie and Wilf, who are pensioners, and their grown-up son, Jerome. Jerome has a social worker. Then there's Vee, then us, then Em-next-door. And last but not least, on the other end of the terrace, there's Nancy. Nancy used to be called Norman. Norman was a bus driver before he had the op. Nancy was a great help to me when I was writing YaYa Bordello, my drag queen in Heaven Sent. You can always see Nancy buying her frocks at the Wednesday market. Well, to be honest, you can always see her anywhere as she's six foot five and has a Tom Selleck moustache.

There! So now you know about my life. And people ask me where I get the inspiration for my villages and characters from - they should spend a few days round here and they'd know. For every writer, inspiration is all around you - you only have to look. And real life here is definitely far, far stranger than anything I concoct in my fiction - and I absolutely love it.
Posted by Christina Jones at 14:39

What a fabulous picture I have of everywhere in my mind now! And I have just finished reading 'Heaven Sent' (well, last week) and I LOVED it! I'm delighted to hear that Yaya exists! hehehe

Thanks mummy - glad I haven't scared you away with far too much info on my less than salubrious lifestyle!!! Delighted that you enjoyed Heaven Sent (I did have fun writing it)and I'll let Nancy know that YaYa has another fan!