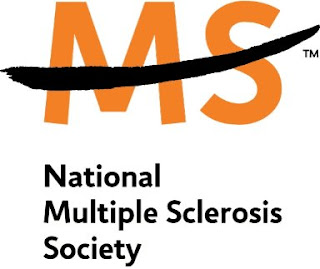 Because of Clyde, I haven't felt much like writing or doing anything at all for a few days. I'm not one of those people who can immerse themselves in work to assuage grief. I just fall apart - spectacularly - and feel like crap and cry and hide away doing nothing until it starts to hurt less. Sooo - no Moonshine, no short stories, no Telegraph features and no blogging for a bit. Just a lot of crying and hurting and hating it at feeding times when there's an empty space and at bedtimes when he's not purring in my ear...

However, I did have a prior writerly engagement last Friday that I really, really couldn't cancel - so armed with Kleenex, dark glasses and a pasted-on smile I gave it my best shot. And I'm so glad I did.

Ages ago I'd agreed to be the guest speaker at our local MS society's monthly social day. On the first Friday of each month they get together and have a bit of a party with a speaker in the morning, a nice chatty noisy lunch, then have visits from useful professionals - health workers or alternative therapists, that sort of thing - in the afternoon, and everyone has a really good time. Anyone with MS from anywhere in the county can come along - and they do - and it's a far from down-beat gathering! They all sympathised about Clyde and in the end, despite my initial idea that I'd be the one doing the uplifting, they were cheering me up.

I've been involved with the MS society for ages as A, my beloved and lovely sis-in-law, who died four years ago on the day before her 40th birthday (oh, how she wanted to hang on for her big 4-0), had had MS for a long time and was on the committee and always at the forefront of these lively social events. And she didn't die from MS - if she'd simply had MS she'd still be here now, but she - bloody unfairly - had a double whammy and died from acute myeloid leukaemia. So, because I'd made friends at the MS society and for my s-i-l's sake I always keep in touch, and J - the local organiser who truly deserves a medal for his tireless fund-raising and simply for refusing to accept that there are things MS sufferers can't/shouldn't do and therefore has his lot taking part in adventure trips, fashion shows, bowling and wild dance parties - has been a friend of mine since we were kids. J's MS does mean that he can no longer drive, but because he's a bit of a babe magnet he always manages to have a raft of glamorous female chauffeurs on hand to whisk him off wherever he needs to go. Reading this and blushing, eh, J????

So, I arrived at the hall early and asked if anyone needed a hand with anything. They looked at me askance and said that they were absolutely fine thanks and I'd only get in the way... So, I wandered about, getting in the way, until it was time to talk. Now I'm not good at talking. I mean I'm fine in normal conversation but as I've never actually felt like a Real Writer it always seems sort of fraudulent to stand up there and wax lyrical about my books. However, the MS lot are always up for something different and gave me a rousing cheer. I faltered into my opening and then someone asked me how The Toyboy Trucker was and was it true Elle was getting married? And what was her dress like and how many bridesmaids and where were they going on honeymoon...? Once we'd got a lot of family stuff out of the way I started again.

This time it all seemed to be going well, and I was just explaining the reasonably, in my opinion, interesting stuff about authors having little say in cover design or anything else once the manuscript is with the publishers, when one of the ladies bustled out of the kitchen and put a huge pink and white cake on the table in front of me. 'The candles is a bit wonky,' she said cheerfully, 'but I think it's okay.' 'Oh!' I simpered. 'No - it's just lovely - thanks so much...'

'Tain't fer you,' she looked at me like I was barking. 'Tis for Liz. It's 'er birthday. 'Aven't you finished talking yet? Blimey - 'ow much longer are you going to be, duck? I'll put it back in the kitchen, then.' She swept the cake away again, glaring over her shoulder. 'And get a move-on, there's a good girl.'

A lot of people started clapping then so I just asked if there were any questions and there were. Mostly about Elle and The Doctor's wedding. Then the cake came back and the candles were primed for lighting. Still smarting with embarrassment at my faux pas, I offered to do the igniting honours. Sadly the cake lady had acrylic fingernails and as she held the cake steady and I let rip with the lighter they went up - pooof! - just like that! Followed by a good chunk of my audience, she ran out of the room with her fingers on fire like something out of Harry Potter (I'm guessing here as I've never read/seen Harry Potter but I would imagine they have sort of magical incendiary scenes where people run amok with blazing talons). Mortified that I'd just set fire to someone but with the candles still unlit, I had another go - this time without disaster - and got a smattering of applause from the people who were still in the room. Then Liz blew the candles out and we all sang happy birthday (and yes, I know - if I'd been a Real Writer I'd have got a plug in there for the new book of the same name - but I'm not and I didn't...) and someone (not the lady with the melted nails who came back wearing mittens and giving me a very wide berth) sliced the cake up and we all had it with coffee - and then I dished out copies of some of my large print and audio books and we had a very lively lunch.


It all disintegrated into a bit of a scrum after that, but loads of people chatted to me about the books - and I think, like me, they felt much more at ease when it wasn't a formal "speaking" thing.


By the time I left, the MS society were excitedly discussing plans for their next day's 12 hour boat-trip-and-pub-crawl - and I only wished I felt fit enough to join them... but at least I hadn't cried for six hours and that's some sort of record...
Posted by Christina Jones at 23:19