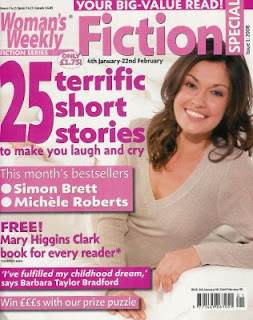 This is a bragging, trumpet-blowing, writerly post because today I have a short story published in the Woman's Weekly Fiction Special (not the one in the pic, I hasten to add, which is an old issue but was the only copy I could find to illustrate this post) for August - October. And not only do I get a lovely mention in the magazine's editorial column, but my name is splashed right across the front cover. This Week's BIG NAMES, it says, Maeve Binchy and Christina Jones. Well - blimey! Maeve is certainly a BIG BIG BIG name - but me??? Me and Maeve mentioned in the same typeface? As a huge Maeve fan I know I'm not worthy, but I'm THAT impressed! Thank you so much Woman's Weekly!

My story is called Hobby Horse and is one of a series of amusing (?) "factional" stories I've been writing about my childhood. There are a couple of dozen of them so far and some of them have already been published in Woman' Weekly, My Weekly and People's Friend. There are lots more that possibly aren't quite suitable for these mags, but my plan (yes I do sometimes have plans, not always very good ones, but plans never-the-less) is to try and find someone to publish them together in book form as a sort of autobiography. I'm toying with Christina Jones: The Prefab Years as a title, but am aware that unless you're a Baby Boomer you've probably never seen a prefab, and that the yoof-generation think prefab has a much more techo meaning and will expect me to be a whizz with computer gizmos or something...

The stories all feature me, my mum and dad, our dog, my nans (Nannie One and Nannie Two), my cousin Gillian, Brown Owl and her thimbles, and Mrs Filkins, my school teacher, as well as a cast of a thousand and one other rustic mis-fits... Some of the background is true, some isn't, but all of it is heavily embroidered - in the best autobiographical tradition.

Still, I don't suppose it matters much as people will always assume they recognise themselves in your books/stories, won't they? People often say "I know that was me in so-and-so" and you can keep saying, nope, it wasn't and isn't and never will be, but they won't believe you... Mind you, as long as I don't upset anyone too much with my writing, I don't mind.

Oh, yes - I've managed to upset people in the past. You only have to look at my Amazon reviews to see that every man and his dog feels they have an axe to grind about my style/content/factual accuracy. That's fine - but I do think it should be reciprocal. I itch to use the right-to-reply button and say - "okay so that's your opinion - now when you've written a book and had it published please let me have copy so that I can review it in public where thousands of people can read what I think of it on a daily basis"...

I had one (anonymous and written in green ink - honest!!!) hate letter (left for me at a local book shop and they assumed it was fan-mail so passed it on) that wanted me to die because I'd written about fairgrounds in Stealing the Show and she (I assume it was a she) said fairs were dens of iniquity and I should be burned at the stake for suggesting they were anything but. She informed me she'd disposed of Stealing the Show in the dustbin, holding it at arm's length, wearing rubber gloves, so as not to become contaminated by its filth. Oooh-er. I can only assume she'd had a bad experience on the dodgems.

I also managed to upset a lady while on my recent library tour to promote the Pure Passion Award. In the middle of my spiel she stood up and said both I and my books should be banned and burned because they were obscene. As the rest of the audience hung on her every word and I stood with my mouth open (I'm not Jeremy Paxman - can never think of a clever and pithy put-down until it's far too late) she told everyone that my books were pornographic and filled with disgusting sex acts and four-letter words and that I had no place in a decent place like a library... Well! Once I'd gathered my single functioning brain-cell together and tried to protest that (shades of the radio show here?) I didn't write about sex and my characters rarely swore and that I thought she may have muddled me up with another more - er - robust writer, she drew herself up to her full height (and she was a tall 'un!) and said "well, you would say that, wouldn't you?" and plonked herself down again. There was a smattering of applause, no-one knew what to say, I wanted to cry, and the talk kind of petered out...

I suppose the point here is - cliche coming up - that you really can't please all of the people all of the time - and that once you place any part of you in the public domain then you have to be prepared for a mauling.

Anyway, I'm not going to let that detract from my day of showing-off and basking in glory at being linked with the wonderful Maeve. That's a writing *up* as far as I'm concerned and long live wonderful Woman's Weekly, I say!!!
Posted by Christina Jones at 11:23