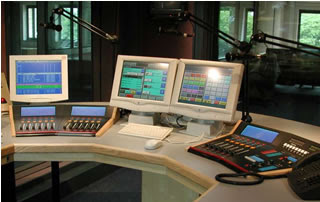 Now, I'll do anything for a bit of publicity for my books - so, when my publishers said they'd been contacted by one of our newish and exceedingly popular radio stations inviting me to take part in their live "Book Babes" show, I leapt at the opportunity. Okay, so with hindsight the show's title should have given me an inkling that this wasn't a literary programme that was going to give Mariella Frostrup sleepless nights, but it's always easy to wise after the event, isn't it???

Another warning sign that things might not go exactly to plan (mine) was that they chose to introduce me by playing Christina Aguilera's "Dirty"... and this was terrifyingly compounded when the lovely presenter said "... and now from one dirty Christina to another..."


I simpered and sweated, as you do, and knew that I was in big, big trouble...


"Tell us about your dirty books," she grinned knowingly.
"Er..." I muttered, knowing that Elle, The Doctor and The Toyboy Trucker were hanging on my every airwaved word, "actually, I don't write dirty books..."
Everyone in the studio laughed. A lot. And I could tell from the body language that this wasn't the response they'd expected.

"Yes you do," the presenter insisted, smiling manfully. "That's why you're here."
"Actually," I muttered in panic, "I - um - write romantic comedy novels and funny short stories and - um - none of them have any sex in them at all..."

More panic-stricken laughter all round. The presenter asked me all about the new book - Happy Birthday - and I could tell by the look in her eyes as I described the feel-good funny bits and the eccentric characters and the villagey background that she finally realised that there was No Sex.

It was getting very, very hot in the studio. I was sweating buckets. Everyone was smiling with gritted teeth and manic eyes.

"Right," the presenter said bravely, knowing that her thousands of listeners were probably now getting a bit tired of this coy shilly-shallying, "but you have romance and love affairs in your books, so there must be some sort of flesh-on-flesh action in them."
"Actually," I gulped noisily into my microphone, "no, there isn't..."

"Ah... Right, well - that makes this next part a bit tricky..."
Next part? I swallowed. What next part? And how much more tricky could it get?
Very, very tricky as it turned out...

I whimpered and prayed Elle and The Doctor and The Toyboy Trucker had found something more scintillating to listen to.

I laughed a lot. The presenter and the girls laughed with me - although not quite so hysterically.

They all clapped, breathed a sigh of relief, thanked me with more warmth than I deserved, put The Other Christina back on the sound system, and ushered me out of the studio.

I sat in reception and wanted to cry at my on-air humiliation. The Book Babes were all wonderful - but I have a feeling I won't be invited back to join them any time soon...
Posted by Christina Jones at 23:27

I've just found this by accident, you never said you had a blog.

I've just read all the posts, crying over Clyde (beautiful photo), loving the California poppies and now cringing for you having to be a judge at the radio station.

Oh no!!! Not quite what you were expecting then? lol Sounds like you handled it well :) Love your books. Thank you for the hours of anjoyment from reading them. I only hope one of mine may be as successful one day.

Debs - I knew you'd find the blog eventually! I kept it quiet until I'd got the hang of it - loads of other posts to publish now I'm back from my hols... but I still doubt if I'll manage to make it a regular thing because I live in a state of constant confusion and never seem to keep up with stuff. Thanks so much for understanding about Clyde, for liking my flowers, and for sharing my shame at being such a blob on live radio!

Mummy - thanks so much for liking the books (I have NO confidence about my writing at all so you've made me smile a lot!!!) And no, the radio thing was just a complete disaster full stop - that'll teach me not to be a media tart! Good luck with your writing - I'll look forward to reading yours soon and being able to return the lovely compliments.

It is superb to have you in blogland at long last!! I'm sure your blog will rapidly become a favourite, just like your books, as you bring your wonderful brand of warmth and humour to everything.

I'm still laughing at your radio expereince! What a shocker! But you did brilliantly well to carry it off with such aplomb and they must be delighted you didn't flip at the mistake and carried on like such a trooper.

I hope everyone rushes out to buy Happy Birthday as soon as it hits the shops. It is absolutely fabulous! I enjoyed every word of it, meeting up with some old favourites and some brilliant new characters, too. It is a must read.

As are the My Weekly stories. Everyone I know who has read them agree they are lovely - but too short! We all want more, more, more Christina!

Thanks a million Mags - but I think I'll probably be a Bad Blogger. I promise I'll try to keep posting on some sort of regular basis - but don't hold your breath! Thanks so much for all your kind comments about Happy Birthday (phew!) and the short stories - I'm so pleased you enjoyed them, but like the blog, writing always seems so hit and miss for me - I'm never sure if anyone ever reads any of it... I suppose this might be a way of finding out (or not???)

Oh dear Christina, what a nightmare for you. The radio show sounds like my idea of hell. However you showed everyone on the show and the listeners that you are a true professional (which we already knew!)

I am getting so excited about 'Happy Birthday' coming out - I need my CJ fix!

ellesbelles - thanks for the vote of confidence and I really, really hope you'll enjoy Happy Birthday. I will really try to blog as often as poss - but as I tend to get sidetracked by vitally important stuff like cups of coffee and staring out of the window and messing about with the cats, I fear it's going to be a bit hit and miss... Professional? Me? Nice of you to say so, but not a chance... I'm a blob!