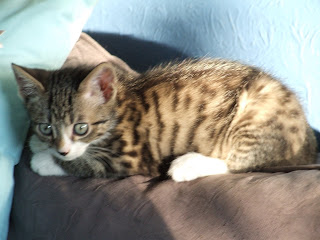 I started off with all good writing intentions this morning - up at 6, cats fed and Toyboy Trucker despatched to work by half-past, me and cup of peppermint tea (I'm not a health freak - good lord, no - BUT I'm currently going to Weight Watchers with Elle pre-wedding, and have therefore given up my daily ration of seventeen cups of milky coffee and four sugars) upstairs in spare bedroom and at the computer only seconds later... Wrote 67 words of the Woman's Weekly short story, flicked on to the MOONSHINE file and decided that Cleo and Dylan - my hero and heroine - should meet really early on in rather odd circumstances, so jotted that meeting down and was quite pleased with it, then flicked back to the Woman's Weekly file and wrote another 56 words - yes! Writing two things at the same time! I'm a Real Writer!

Then I caught a glimpse of myself in the mirror above my desk and screamed (that happens quite a lot). I looked like the love-child of Jimi Hendrix and Co-Co the Clown. Bad, bad hair. Rushed into the bathroom and started washing it. Then I was distracted (this also happens easily and often) by a lot of squawking and shrieking from outside in the back garden. Wrapped my hair in a towel and gazed out of the window (that happens easily and often too) and saw two angry wood pigeons and Dexter, our youngest cat, all teetering on the the flimsy topmost branches of the 60 foot fir tree at the bottom of the garden. Pigeons in attack mode, Dexter ditto.

Dripping, I stumbled outside and ran rather haphazardly, due to flapping towel, dripping hair and being accompanied by several of the other cats who thought it was a new spectator sport, to the foot of the tree. Could only see the top branches waving frantically but the noise was horrendous, so I lobbed stones and fallen apples upwards in an attempt to break up the spat. This was a mistake. They all fell straight down again. On me and the cats. Next I tried flushing Dexter out with a blast from the garden hose - second mistake. Jet fell way short. On me and the cats. Now I was wet and covered in debris and Dexter, a small tabby killing machine, was clearly not going to be robbed of pigeon-on-the-wing. Now I'm very fond of the wood pigeons who've nested in the tree for several years and I'm also very fond of Dexter. I didn't want anything awful to happen to either party. So - I climbed the tree, hoping that I'd manage to diffuse the fracas before anyone died.

This was not one of my greatest ideas given that I was still in my pyjamas and sequinned (I do love a bit of glitter) slippers and, having lost the towel two branches up, my hair was now clinging in sopping rat's tails into my eyes. About 6 feet off the ground I started to get vertigo (and a lot of small twigs in my mouth and eyes) and decided not to climb any further in case I had to be rescued by a lot of hunky firemen or something - this wouldn't be a bad thing in theory, of course, but I simply wasn't dressed for it and I hate seeing anyone without at least a touch of mascara and some lip-gloss. So I just clung on and shouted at Dexter and shook whichever branches came to hand. By this time all the cats were watching from the ground and several of the neighbours had popped out to see what was going on, too. There was a final almighty squawk, and with a great flurry of wings and feathers the pigeons took flight. Dexter, an agile kitten, shimmied past me in a blur of tabby fur. The stand-off was over. All participants were safe! Phew!

So, laboriously and inelegantly and with a lot of not-very-helpful advice from the neighbours, I made my somewhat-slower descent. Staggered back to the spare bedroom and the computer and the short story and novel - slightly annoyed that I'd just wasted a good half-an-hour of productive writing time. Then the doorbell rang.

Dashed downstairs and opened the door to the postman who handed me a package and laughed. A lot. Now our postman is quite cute and clearly a boy with a cheerful disposition. I laughed flirtatiously back at him, exchanged a few words of merry banter, and returned to the spare bedroom rather pleased that even at my age I can still attract the attention of the younger man. Then I looked in the mirror and screamed. Again. In my haste to rescue pigeons/Dexter I'd completely forgotten to rinse off my conditioner and my hair had now dried to cow-pat consistency and stuck out in a mass of unattractive solid tufts. Not only that, it was liberally decorated with twigs and leaves. I looked like a cross between the bloke from Prodigy and a mad woodland Medusa... Aaargh!

On the plus side, I've sold a short story to a woman's mag in Denmark today - but it'll be ages before I can bring myself to face the postman again...

Posted by Christina Jones at 11:02