On Being A Real Writer 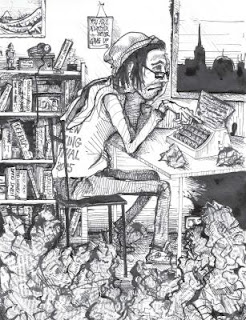 Well - the last few days have been pretty manic on the writing-front. Not only have I been rattling away at a second story for Woman's Weekly (I always like to send two at a time because if they loathe one they might just like the other) and attempting to finish a chapter a day of MOONSHINE, but I've also had a commission! A proper commission - like a Real Writer!

Lovely My Weekly magazine have asked me to write a fiction pull-out of my very own - three interlinking stories set in the 1960s, and they've sent me the whole mocked-up lay-out with some fabulous illustrations. So, all this week I've been thinking and planning and plotting - just like a real writer - and not something I normally do.

For this commission, I've sort of gone along the lines of telling the stories of three girls sharing a flat in 1969, titled each story with the heroine's name a la early Jilly Cooper, and also linked them to the 60s by calling them Eleanor (Beatles), Lola (Kinks) and Carrie-Ann (Hollies). Well - so far so good - all I have to do now is get the word count right, make sure the "historical" details are accurate, edit all three stories and make sure they're as good as I can get them before I send them off on Monday. No doubt I'll rewrite them all a dozen times over the weekend because I'm the least confident writer in the world and have no faith in my own abilities (usually with very good reason!).

As this blog is supposed to be writerly as well as chatty, I thought this would be a good time to come clean about my writing methods. So, this is how I do it... I always start with some nebulous idea, a sort of theme - for my current series of practical magic comedy novels I just find some area of witchy stuff that I haven't plundered before - with MOONSHINE it's magical wine made from berries gathered in the mystical Lovers Spinney, and water either drawn from the wishing well on the village green in Lovers Knot or from the waterfall in the aforementioned spinney.

By the time I start writing anything, my characters are already running around, fully formed, in my head. I don't have to try to imagine them or choose names for them or anything like that. They're just there - like real, living people (which they are to me), and once they've been let loose on the page it all seems to just happen. I have no idea how - which is why I never do writers' workshops. I couldn't stand up in front of aspiring writers and admit that I haven't got a clue how I write - let alone suggest how anyone else should do it. Oh, one thing - whether it's a book or a short story - I have to have a title before I can write anything at all. Sometimes (quite often actually) this title will change before publication, but as long as it's called something, I'm happy.

When I write, I just make it up as I go along. I never plot anything or plan anything or even know how it'll end, and I never make notes on the main story. If there's stuff I need to research (like the firework-making in HEAVEN SENT) I'll do this before I start the book and then I will have the notes for this beside the computer to make sure everything is accurate. Otherwise it all just sort of happens. I don't do a word count until the end - I roughly know that four double-spaced computer pages is a thousand words, and my boks are around 100,000 words long, so that's good enough for me.

I certainly don't write every day - there are days (too many?) when I just don't feel like writing so I just don't... Normally, I'll write from about 6 a.m. until lunchtime. On the really good writing days I'll sit and create my little worlds happily from dawn to dusk (literally). And I usually don't start writing my novels until the deadline is looming because I work much better under pressure. It takes me, on average, six weeks to write a novel and I can write a short story in a morning. I once - in a procrastination moment - worked out that once I get going I average 1,000 words an hour.

I only ever write one draft of anything, just edit as I go along, read through the previous day's work and then leave it. I know loads of Proper Writers will polish and hone and tweak and produce several drafts - but that would drive me mad. Once is more than enough! I just write it, spell-check it, word-count it and send it off. Then I get on with the next thing. I always have three or four different pieces on the go at the same time so if I get bored with one I can flick back to something else...

I've listened to other writers talking about their methods and everyone's different. I don't think there's a right or a wrong way - you just have to do what works for you. Which means I really must stop blogging now and become a Real Writer and get on with the My Weekly stories...
Posted by Christina Jones at 15:57

As a fan of your work since I read Going The Distance, and having now moved to Oxfordshire, I love them even more! Anyway, burblings aside, it's wonderfully inpsiring to read how people write.