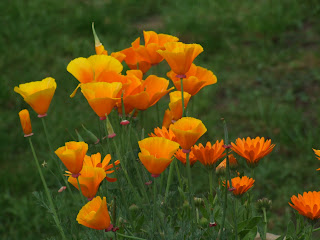 Yay! My Weekly LOVED the 1960s stories and have bought them all (phew!), so today because it's absolutely boiling (summer at last?), I'm skiving from my desk and the spare bedroom and the computer, and attempting, with the help of the cats, to de-jungle the garden.

The pic is of my favourite orange Californian poppies and African marigolds which I have growing in several huge tubs outside the lean-to (the estate agent who sold us the house called it a conservatory; the people we bought the house from called it their sun-lounge; kind friends have referred to it as a garden room - but it's honestly a lean-to, with a corrugated plastic sloping roof, half-brick walls, a lot of big messy windows, and filled with big pots of plants, old chairs and sofas and tables and the cats love it) so even on a cloudy day they glow like fallen sunshine. As Californian poppies (can't spell the Latin name) and marigolds are really hardy, self-seeding and practically fool-proof, I have loads of them and they survive year after year despite my cack-handed horticultural methods. And yes, I know orange wouldn't be to everyone's taste but I do love a splash of colour. Any colour - it isn't just orange in my garden - oh, nothing as stylised as that - I have reds and yellows and purples and blues and pinks all clustered together, too. In fact, my garden, like me, is a bit haphazard - it certainly, also like me, isn't at all tasteful - it's a complete rainbow hotch-potch of anything that'll grow. The more garish and clashing the better. Sissinghurst it ain't. Alan Titchmarsh I ain't.

I usually say it's a cottage garden, or organic, or wildlife - all of which cover the fact that it's pretty overgrown and full of things I didn't plant and don't recognise... I never use weed-killer or slug death pellets or anything like that - just hope that the weeds that flourish will have pretty flowers on them, and that the slugs and snails will provide three meals a day for our resident toads and hedgehogs (as long as I don't have to see it - or hear it! Have you ever heard a hedgehog squishing its way through a slug????). We do get loads of bees and dragonflies and frogs and the aforementioned hedgehogs and butterflies though - sadly, Dexter seems to think it's his mission in life to reduce the numbers of the latter single-handedly (pawedly?). Sometimes when those earnest chaps in anoraks and comb-overs appear on the local news to report that there are now only 93 brown-backed, hawk-eyed, rag-winged Bronze Beauties left in Berkshire, I look at Dexter, chomping, and think "92, actually..."


So, today is definitely a non-writerly day - although I may have to knuckle down before long as my publishers (Little, Brown) have suggested I write some features for the Sunday Telegraph. Ooooh! There's posh! They want 750 word articles for their First Person column - it has to be about a person/animal/event that has touched you profoundly and/or altered your life. I'll have to mull over a few ideas - actually, I'd love to write about my Nan (will have to refer to her as Grandma as it's the Sunday Telegraph) who was completely barking, had been a complete tart, didn't eat solids for the last 43 years of her life, and had what we in the family referred to as "brain storms". Any of these should have had her certified and committed of course - but hey, in rural Berkshire she was comparatively normal... Or maybe that isn't Sunday Telegraph material - maybe I'm not Sunday Telegraph material???

I think I'll just potter (euphemism for sitting and staring) in the garden and see what springs to mind.

Despite their enthusiasm, the cats, even without Dexter deciding to cull anything that moves, aren't much use in the garden really. They get very excited when I pull things up because it gives them nice fresh earth for their lavatorial excesses, and then usually help by digging up things that should stay planted. Emily and Alexia are best at this as they're black and tiny with little pointy paws and can completely wreck a flower bed before anyone actually notices what they're doing. And yes, I do have flowers. Sometimes I've even grown them myself...


My almost-favourite flowers are sweet peas and freesias - mainly because they smell fantastic and come in a whole array of colours. You might have gathered I'm obsessed with colours - especially the same things in different colours - like boxes of crayons or strings of beads or fairy lights. I always assumed this obsession meant I was a happy, cheery sort of person but no. It apparently means I've never left childhood, am immature and possibly have arrested mental development - hey-ho! But, in spite of this - or maybe because of it - my favourite flowers of all time are mesembryanthemums or Livingstone Daisies. Oh, I love them! I can even grow them - and I do - everywhere! I just adore all those pastel colours, the shading - yessss! - lots of different colours on ONE flower, the layers of petals like can-can petticoats, and the fact that they look like sea-anemones should look. Everyone had them when I was a kid so they remind me of hot childhood summers, and I can sit and stroke them for hours.

Right, now I really must leave the blog before the cats completely wreck the bit of garden I've done... Maybe the Sunday Telegraph would like to know about my obsession with colours - or maybe not... I'll go and potter and think about it...
Posted by Christina Jones at 12:19