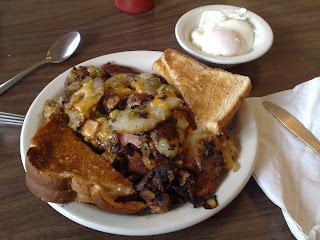 I love food, am never happier when I'm eating - hence the current Weight Watchers boot-camp - but I'm probably the worst cook in the known universe. I'm obsessed by cookery programmes like Masterchef because that's what I want to be like. I want to survey a hotch-potch of unknown and unrelated ingredients and then get a light-bulb moment and start sieving and shaving and whisking and straining and reducing like billy-o - and voila! - 30 minutes later produce three different and absolutely perfect cordon bleu dishes.

Oh, can I just add here that while I may drool over television cookery shows, I'm definitely not a fan of the celeb chefs who seem to delight in making friends with their animals, give them cute names, and then happily kill and eat them. Come on? How in the name of all that's holy can that be right? Okay, so I'm an animal-loving veggie and therefore never going to chew my way through cute little Persephone Piglet or Letitia Lamb - but surely there has to something almost cannibalistic about eating the flesh of something you've named, played with, chatted to, comforted and cosseted, hasn't there? My take on this is if you want to eat meat, then at least let it be in anonymous, polythene wrapped chunks. And I was horrified to notice our local supermarket has started labelling their meat with "kill date" and "named abattoir". Far, far too much information. Even if I was carnivorous this would put me off meat for life - I really don't want to know that three days ago my pork slice was enjoying the sunshine and snuffling happily round in Essex mud, or my lamb chop was joyously kicking up its little heels in some Surrey field, with no clue as to their imminent terrifying journey to "named abattoir" and subsequent awful fate. Ooops - almost a soap-box moment there - sorry! - and I'm digressing. Again.

The whole point of today's blogging was to muse on the fact that having just read through my new book - HAPPY BIRTHDAY (out Nov 6th - shameless plug!) - I was amazed how much time the characters spend cooking and eating. As it's a summer book, they're constantly having lavish Enid Blyton style picnics or whipping up tasty al fresco dinners/lunches/breakfasts. I honestly hadn't been aware of it while I was writing, so it must be an unleashing of my subconscious fantasies about being the sort of person who can rustle up a nourishing meal from two radishes, a handful of dried pasta, a banana, three spring onions and some cornflakes. My mum could do it - so could both of my grandmothers - but the gene has sadly passed me by. I'm absolutely useless. I follow recipes to the letter and they turn nasty. I've been known to foul-up a salad more than once. Even cooking stuff-out-of-packets never goes quite right. And don't talk to me about microwaving - am I the only person who ends of with a sort of charred mess in the middle of the dish and a lot of solid burnt bits round the edge and the polystyrene container looks the most appetising part of the meal? The normal oven is a mystery to me, and I haven't used the grill for 8 years since a cheese wedge got - er - wedged on the bars.

Recently, I tried to be experimental and merge an orange dinner with a white one. It didn't work. Even the cats wouldn't eat it. So, Delia, Nigella et al - you're quite safe. I'll stick to foodie fiction and let my characters whip up a salivating storm. Sadly, I know my culinary limitations...
Posted by Christina Jones at 09:12