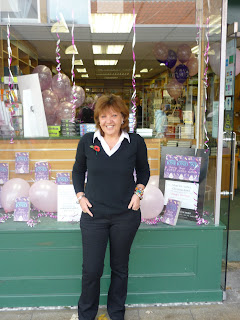 With apologies to those of a literary bent who might think I've gorn all upmarket and am alluding to Harold Pinter in today's title. Sorry - nope. I'm still as downmarket as ever and this is just about my little local shindig launching Happy Birthday which co-incided nicely with our local indie Bookstore's 10th birthday - so we had a joint party on Saturday.

This is me, looking chubby and mumsy and dressed as Harry Hill (I thought I looked nice and smart and reasonably tidy for a change - didn't realise how huge the damn collar was until I saw the pics - sigh...) outside *my* window. I get so excited when I see my books on shelves in shops. I'm always so grateful and I don't think the magic will ever wear off.

The whole shop was awash with balloons and bunting and glittery stuff (and wine and cake) for the party, and it was lovely.

Fortunately the local press and photographers arrived early, so all the embarrassing pictures of me and Ian (the Bookstore's owner) fighting our way through bunches of balloons were taken before anyone arrived. Unfortunately, The Toyboy Trucker still managed to get this shot of me, Ian and the photographer as I was being eaten by balloons... "...no, that's it, love - we don't wanna see yer face - just the new book - that's it! Lovely! Nah - don't smile - no need, we can't see you... smashing... " 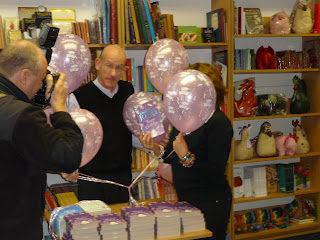 As with everything in our town, the event was flatteringly well-attended - (yes, I've done the soul-destroying signings in Strange Towns where there's been me and fourteen shop staff and absolutely no-one else all day) - mainly because a) if there's a bit of a crowd gathered anywhere here, people come and have a look in case there's been an accident or something exciting and b) there were balloons. We also had a bit of a scrum drummed up by the Town Crier in full traditional regalia, marching through the town ringing his bell and bellowing his birthday greetings from an unfurled parchment. He bustled into the shop (still ringing and shouting) followed by a lot of children, two dogs and several drunks. The mayor, also in full regalia, was slightly behind this raggle-taggle procession, but finally made it.

Then there was cake-cutting and champagne-popping and more balloons and lots of clapping. I smiled a lot and signed books - any books - and chatted to all and sundry. Most of the all and sundry were my friends and people from the estate who find the book stuff quite amusing. Still, they kindly bought copies of Happy Birthday and let me sign them - and there were even quite a few people who didn't know me from Adam and came along simply for the signing session which was very flattering. One woman seemed quite affronted that I'd actually written a whole book, by myself, and didn't live in London. She felt, she explained quite seriously, that I couldn't consider myself a proper author as everyone knew all writers lived in London, but she thought I'd done ever so well anyway...


My good friend and fellow-local-writer, Jane Gordon Cumming, was there as well, signing copies of her fabulous rom com A Proper Family Christmas (top tip: buy it for Christmas pressies - it's brilliantly funny) and was only a little fazed by some of the estate's more colourful residents. After meeting Vee, Jerome, Shaz and Memphis and a couple of The Toyboy Trucker's fellow drivers (all shaven heads, piercings and tattoos) who'd come along to offer their solidarity and see what there was for free, Jane said knowingly that she could see where I got my characters from... However, nothing but nothing could have prepared her for the arrival of the Snowdons.


The Snowdons also live on the estate, but not in our terrace, and I first met them during one of my evening shifts at Hairy Harry's. They'd come in for a meal - Mr and Mrs Snowdon, both in their seventies, and their middle-aged daughter Marcia - and it was they told me, the first time they'd ever eaten out. It showed. Hairy Harry's is a pretty run-of-the-mill estate pub with a fine pub grub menu - anything with chips - the Snowdons were Dressed Up for the occasion. In evening clothes dating back to the 1950s. Mr Snowdon had a tuxedo and a flat cap. Mrs Snowdon was wearing a fur stole. And Marcia looked like something from the Ascot scene in Pygmalion but possibly not Audrey Hepburn. I served them with Chicken New Yorker and Chips three times with extra tomato ketchup and three halves of shandy without batting an eyelid.


So, I really shouldn't have been surprised that they'd Dressed Up again for their visit to the Bookstore. This time they looked like rustic extras from an Agatha Christie adaptation. I was touched that they'd made the effort. It was, Mr Snowdon informed me and the whole shop, very loudly, their first visit to a book shop. He didn't hold with books. He'd never read a book. They gave you ideas. However, Marcia liked them so they'd come along. He then insisted on introducing me to everyone as Mrs Townsend "... she'm worth a mint, this gel... millions she'm got from that ol' book writing. Blame wrong if you asks me - why would anyone wanna pay money for them ol' books. Loada bloody rubbish she writes..."


Yes, I kept a straight face. I'm not sure about Jane - I didn't dare to look at her. Elle, who was there as moral support for just such an occasion, simply screamed with laughter and ran away, and The Toyboy Trucker staggered outside for a restorative cigarette. Anyway, I bravely signed a book for Marcia who curtsied (not that I can make any comment about this as when I was first introduced to Katie Fforde many years ago I was so star-struck that I also curtsied...).

Anyway, on the whole, the party went well. I sold nearly fifty copies of Happy Birthday, ate a lot of cake, drank too much fizz, and carried several balloons home while lustily singing Bobby Shaftoe.

And now I can't wait to do it all again next year!
Posted by Christina Jones at 09:37

You don't look mumsy - you look *fantastic* and sleek, Christina! It sounds like a fab day.

So delighted it all went so well and you sold so many books. Great stuff. I'd love to have seen Jane's face when she realised truth is stranger than fiction and the sources of inspiration for your superb characters are alive and well and were parading before her!!!

And you did NOT look remotely chubby or mumsy.

You look fabulous!!! and no, I don't mean in the photo behind the balloon!

It all sounds like a lot of fun - what a hoot! I'm so pleased for you! I may go and have a piece of cake now for a belated celebration!

phillipa - ooh, thank you!!! Sleek!!! no-one has ever used sleek and my name in the same sentence before. And sleek wasn't remotely how I felt - but thank you again because it's made me feel sooo much better. And yes, it was a fab day - the sort of day that makes being a writer a Good Thing for once.

mags - re the chubby and mumsy see above! But yes, it was a great success and a lot of fun - and I do feel that poor Jane may have been a little overwhelmed by the - um - oddity of our locals...

What a brilliant post - a story in itself! You look great and it sounded like the ideal book-signing day to me :o) Love the comment about not being a proper writer unless you live in London!

mummy - thank you - although I personally myself feel the balloon pic is one of my very best - oooh, and NO! Don't do it! Remember the weigh-in! Step away from the cake!!!! NOW!

karen - thanks for enjoying the post. It was a fantastic day - although I always keep pinching myself when I see *my* books because I still can't believe it. Sadly, the London thing seems to be a common idea round here - once, when someone introduced me as "and this is Tina (the name used by everyone who has known me since childhood), she's a writer" it was greeted by - "Get away! Book writers all live in Lunnun. She'm not a writer! She'm that fat gel from the prefabs". Hey-ho.

LOL, blimey, what an occasion, it sounds utterly fascinating. You do not look mumsy at all though, you look wonderful. Happy Birthday looks beautiful in the window too.

I loved Jane G-C's book, a great read, and I can heartily recommend it to anyone.
x

Brilliant post, thanks for the chuckle, and I'm glad the launch went well!

Well, I'm disappointed. Where was the bright pink dress with turquoise stripes? Where was the polka-dot fifties skirt with piles of petticoats.

I don't know. I turn my back for a second and there you are dressing like a smart, chic best-selling author from London. What ever is the world coming to?

I shall simply have to bury myself in Happy Birthday to make up for it (but not until next week because I have Seriously Bad Diary Planning at the moment.

debs - thank you! I felt okay (it wasn't until I saw the photos that I realised, yet again, that I'm never going to be mistaken for Lulu) and it really was a great day.

womag - so glad it made you chuckle - I laughed a lot too - in between the wincing and cringing, but honestly enjoyed every minute of it.

jan - good luck with sorting out the diary - I know how busy you are, and I really hope you'll enjoy HB when you find a spare min for reading. Chic???? Chic??? Very sweet of you - the entire outfit cost 15 quid from QS - but yes, I have learned (hopefully) not to make the huge sartorial gaffes I made in those early days... eeek!

Hi, I came over here from Debs and giggled my way through your post. Congratulations on such a sucessful book launch! I can not believe that you think yourself to be fat!? You are not!

dj- lovely to see you here and yep, I *know* you well from debs' blog. So pleased you found the post amusing - it was a lovely day but VERY funny... And thanks so much for the compliment - accepted with good grace (and a lot of preening!!!)

Congratulations!
How totally brilliant it must be to see your book on the shelves. How about seeing people read them?
Loved the Snowdons... dont you just love people who are stranger than fiction... we have one or two in my village. Our female choir (all well over seventy) is the best. Woolly hats and big thick glasses a la Eric Morcambe.
Absolutely cannot wait for the Christmas Carol Concert. Its like a comedy sketch but without the canned laughter....

LWM - oh you have to use your choir in something! I can just "see" them now! Fantastic! And yes, thank you, it's still quite amazing to see my books in the shops - and seeing people reading them sends me into a frenzy but I'd never approach them. Did it once in the early innocent days. On a train. Said "actually, I wrote that" and got a barrage of abuse and accused of being "the nutter on the train" a la Jasper Carrot... That learned me!