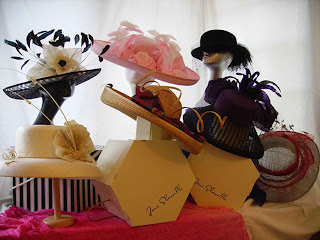 I'll cut the whole boring thing short here by saying we didn't find one. Not one. Clearly not a good time to look for wedding hats - the only hats we found were Santa ones or ones with flashing antlers and although they would look quite amusing on ma-in-law I don't think she'd see the funny side. Having exhausted Oxford's hat shops we're going to try Reading and Newbury. After Christmas.

Ma-in-law is wearing red to the wedding. I think we're all wearing red except Elle. We'll look like Arsenal Ladies Second Eleven. Ma-in-law wanted a frou-frou cartwheel hat in black and red. She's quite short and Elle and I did say we thought a big hat would make her look like a mushroom. Fortunately she's a bit deaf too.

I tried on some fascinators. Couldn't afford them because they were Jasper Conran and therefore about three hundred quid a feather, but it was nice to see what they'd look like. Once she'd stopped laughing, Elle took pictures on her mobile phone to send back to The Doctor because she said I looked like an electrocuted emu. As this wasn't the look I was aiming for I put them back. I may re-think the fascinator. Maybe fascinators aren't for people like me who tend to look a lot like Benny Hill.

There was a funny moment in Debenhams (Debenhams has been "modernised" recently - which means they've done away with much of the floor space and now have all the departments crammed together upstairs like a posh jumble sale and the lower floors that used to have all sorts of nice sections like haberdashery now just house massive escalators) when Elle and I lost ma-in-law. It's quite hard to spot your own small bubble-permed pensioner in a sea of small bubble-permed pensioners. Especially when they're all wearing the same coat.

Giving up the search in the melee that was the evening-wear department (Dolce et Gabana sequinned vests at £2,500 anyone?), we thought she might have decided to go downstairs, so we took the plunge earthwards on the down escalator. Halfway down to the basement we passed ma-in-law sailing upwards alongside us. We all waved at one another and made extravagant hand gestures indicating that she should stay put and we'd her meet at the top. Suffice it to say that no sooner were we on the up escalator in hot pursuit when we passed ma-in-law sailing downwards. We all waved again. This went on for almost half an hour. What seemed quite funny at first soon became bloody tedious.

In the end, I stayed at the bottom and Elle stayed at the top. Ma-in-law didn't arrive at either of them. Feeling a bit worried that I'd have to go home and tell The Toyboy Trucker I'd mislaid his mother in a department store, we searched high and low (literally). Forty five panic-stricken minutes later we eventually found ma-in-law having a skinny latte and a Danish in the coffee shop with a man from Croydon who had lost his wife in bedding.

Nothing much else to say about the day really except The Toyboy Trucker declined to come with us because he has a cold. It'll be man flu by this time tomorrow - or I'll eat my hat....
Posted by Christina Jones at 14:28

We went on an RNA tour of Locks (the v posh hat shop in St James') and I fell in love with a bright red hat there. I glanced at the price and put it back EXTREMELY hastily, only to have the assistant look across with a smile and say that was one of their best-value ranges. Apparently £79 is really quite a modest sum in the Hat World...

Oh gawd Jan - it's another world, isn't it? £79 for a *cheap* hat - lordy lord! I was thinking of paying 20 quid at the very most for my fascinator - and discovered they cost more than that for kiddies fancy-dress party ones in Claire's Accessories...

Of course, what you could do is buy one of those novelty pens with feathers and sparkles and stuff springing off the end and stick that in your hair (a la a certain past chairman of the RNA). They only cost £2.99 and you can use the excuse that you're a writer...

Oh Chris I am crying laughing! Thank you! I needed a good chuckle today!! I've never had the need to buy a hat or a fascinator....and after reading about your travels I hope I never do!! xx

Thanks so much for making me laugh. I'm having a sneaky peak during my lunch break (Hah, that's a joke and generally entails stuffing low-fat Philly cheese sarnie in face, whilst typing Minutes, or some such other nonsense).

I now feel cheered up enough to able to press on for the rest of the day. Glad you found Ma-In-Law in the end! Love Elle's comments, brilliant.x

Yes, really made me laugh, in sympathy! I don't do hats, unless it's a sunhat in the heat or a woolly hat in the cold, so I too opted for a fascinator for wedding No.1 this year. Top tip - I got it from Accessorize, they had a good selection and were cheap. Actually 'going cheep' was quite appropriate cos when I looked at the wedding pics, I wanted to know why nobody had told me I looked like I had a dead bird on my head. So that was it - I was naked-headed for Wedding No.2!! Sorry, don't be put off: it was probably just the way I was wearing it. Or whatever!
Glad you found Ma-In-Law. How funny!

Oh, dear, I feel quite ill with laughing!!! It was the image of the scene on the escalator what done it!! Superb! What a ruddy palaver. And then to find her with some bloke having refreshments. Charming!!

I've never been a hat person, I have to say. The don't suit me at all. (For me, a brown paper back down to chin level would probably be the best thing for all concerned!) I'm sure you will find something perfect by wedding time - and, knowing your wonderful bargain finds in the past, eg "the dress", I shall expect some amazing designer creation for £1.99!!!!

jan- brilliant! I've got several of those fluffy feathery pens somewhere - and J always looked great in hers, didn't she? Bargain price too - I might just give it a go! And people always expect you to be odd if you're a writer anyway...

mummy- so pleased to have cheered you up. As with all things, it's funny afterwards, but at the time... And I'm with you on the no-hat thing! It's gonna be feathers, flowers or nowt.

debs - hope you enjoyed your lunch *break* and glad you laughed and felt better for it. Know you'll laugh more than most as you know *exactly* what my m-i-l is like and can probably visualise the whole sorry scene...

write woman - mmm, now I'm thinking you're right about the "dead bird" thing and this fascinator addiction might just be a step too far. May go hatless or just have a single flower, as the frock is either can-can-y (feathers)or flamenco-y (flower) depending on how you look at it... I *knew* I should have bought a nice suit!

mags - hope you've recovered now - and as you know a lot about my m-i-l you can see the funny side... As for bargains - yesss - and I'm all for Jan's great suggestion!

Glad to hear that you didn't lose ma-in-law. It would have taken some explaining. Can't remember the last time I needed a hat and judging by the cost of them I'm hoping it'll be a while yet before I need another one.

I've been a fan for years and I try to keep up with your news through your webpage but, I just saw the note about your blog.

This was a great post. I really enjoyed it. Something similar to your escalator story happened to me 20 years ago. I couldn't decide whether to laugh or break out in a sympathy-sweat!

katiebird - lovely to see you here. Thank you for all your support through the years - much appreciated.

Gonna-be - I'm with you - and really, really not sure about the hat/fascinator any more - can think of better things to spend my (non-existent) money on..