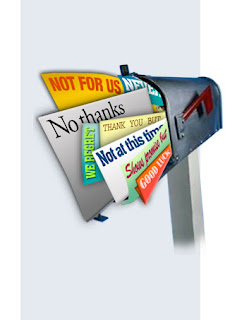 Lordy! I'm absolutely amazed the postman didn't have a hernia delivering my mail this morning. There were eleven chunky packages - all from Take a Break...

Eleven stories rejected in one hit.

I didn't even remember submitting eleven stories and thought there must have been a mistake and they'd sent me someone else's manuscripts as well - but no, sadly they were all mine. Take a Break must have been storing them up for ages to give me a lovely surprise... Eleven rejections in one go has to be a record - even for me. And despite me saying, when I subbed them, that if they weren't accepted then I didn't want the manuscripts returned, I've got them back in all their unwanted glory. And, as I've said, they all came in separate envelopes.


Eleven envelopes each containing one rejected story, one standard letter saying they were rejected as they weren't suitable, and one set of guidelines to explain to me what "suitable" is. Aaargh!!!!

Eleven rejections at once is a pretty good way to knock the bounce out of even the most cock-eyed optimist - and with the eleven unwanted and unloved manuscripts in front of me it makes it sort of even more gruesomely real... So, yes - sob! It's official. I'm a failure. No, worse than that, I'm a fat failure. I'm probably going to have to eat cheese. Or a Toblerone. Or both. Together.

Now (half a day on from the above litany of awfulness) I've stopped swearing and pouting and grizzling and behaving like a prima donna, and have taken notice of a) the guidelines, and b) my rejected stories, and c) re-read my latest copies of Take A Break and Fiction Feast, and have to grudgingly admit they might have a point. Okay, they might be right. All right - yes, they were right. Maybe my stories weren't quite suitable... just maybe... But I'd have appreciated them being not quite suitable in smaller quantities. The sheer volume of not suitableness is just a bit overwhelming.

So, being positive here, currently I'm sitting with eleven TaB rejections, five Woman's Weekly rejections, and that three-part serial that might just be okay for My Weekly when it's been rewritten with all the bleak bits removed... So, being even more positive, that means I've got sixteen already-written stories that just need a bit of a tweak (and a serial that probably only needs working on for a day or so!!!) - then all I need to do is find a new home for them... Piece of cake (oooh no! Don't mention cake!) - this writing game is easy-peasy - just have to try and work the eleven rather sordid TaBs into something nicely cosy for People's Friend, and cull the WWs into something sassy with a twist in the tail for TaB... There! Sorted! Bring on the next problem...

On the plus side, Little,Brown have sent me three great reviews for Happy Birthday which all appeared in papers over the weekend and it isn't even out yet. This cheered me up no end as everyone seemed to like it and said all the right things like - funny, warm, cheerful, humorous, charming, compassionate, well-observed characters, satisfying story lines, gentle, romantic and lovely.... Two of them even said they loved it, and they all recommended it as a Good Read.

I'm not bragging you understand - just trying to offset the grimness of ELEVEN rejections...

Makes my 2 rejections from TaB this week (yes, in separate envelopes, on the same day, in all their rejected glory) a little easier to not-deal with knowing that I'm not alone. The bummer is that they were both Christmas stories, so I won't have anything in any of the Xmas specials this year. Sob.

OMG! ELEVEN! I felt bad enough when I got four at once from PF.

It's a helluva downer reading how someone so brilliantly multi-published with short stories as well as all the yummy books gets the 'no'. I mean, what chance have newbie wannabe short story writers got?

It's great to hear about the Happy Birthday reviews though - and they are much deserved, I heart HB.
xxPat

Eleven??!! Oh Chris, that must have been awful! You deserve a toblerone after that...but only ONE, hear me?! And track it!

Delighted the reviews for Happy Birthday are good! Can't wait to get my sweaty little mits on it! :)

I feel that TAB's loss will be our gain and look forward to when you publish your short story book.

I am hoping to buy Happy birthday tomorrow as it will be mine in a couple of days.

jan - thank you - and hugs back and all sympathy. TaB must have been having a Jones cull day! And yep, a rejection shared is a rejection halved - so thanks a million for sharing. Their loss all round! Trouble is, TaB stories are difficult to place anywhere else now that Chat and That's Life have stopped taking fiction - ah for the heady days of Loving (that's not a 60s song title by the way!)...

pat - bless you - and I'm so pleased you hearted HB! Hugs for the 4 from PF... If I was a Proper Writer I'd probably only ever post about my successes, but as that would defeat the object of trying to be honest about being a writer and also turn me into Someone I'd Like To Spit On, I'll carry on being truthful.

mummy - have just tracked the Toblerone - eeek! Do you know how many points there are in just ONE??? Do hope you'll enjoy Happy Birthday - sweaty mitts and all. Is your WW blog up yet???

brand-ie - oooh, yes. A short story anthology. Great idea - thanks - might call it "Grim Rejctions"... Also hope you'll like Happy Birthday too - and thanks a million for ordering it! You're a star.

Having consulted my online thingy mabob that would be 6 points in a slim one and, oh no, ELEVEN in a standard bar. That number is not leaving you alone today is it?

No, the blog is still not up. I've no idea when it will appear. Seems all the online content is done via the US team so I'll just have to keep waiting. I'll be submitting week 7's blog this Friday!

mummy - yes, exactly! ELEVEN points in a standard Toblerone. And I'm only on 18 for a whole day!!! Sooo seven left - oooh, let's see what I can do with seven points... Cheese perhaps - or maybe a very small Toblerone???

Blimey - I had one from them this week and that was bad enough! Sometimes I think they just have mass clearout - did it look like they'd been read?? Actually probably best not to think about it any more!

Nice to have some lovely reviews for Happy Birthday though - I'm looking forward to reading it :o)

karen - sympathies on your TaB rejection too. Maybe it's just an early spring clean??? And no, now you come to mention it, they don't look - um - particularly sullied by editorial hands - but maybe that's just because they aren't as messy as me. I really hope you'll enjoy Happy Birthday - oh, and thanks so much for writing your blog, it's the funniest thing I've ever read. Have you tried subbing it as a feature series???

ELEVEN! How horrible, poor you.

My record is three, but then I only had three out there at the time :)

debs - oooh thank you. The three "no thanks" must have been really nasty for you and I'm so sorry, but it's so nice to know I'm not alone in multiple rejections...

Eleven, you poor thing. I had 3 on Saturday- definitely a TAB clearout week. God I hate it when they do that.

Toblerone is definitely the answer, as is reading and re-reading your great novel reviews.

womag - I'm so glad I posted about the TaB rejctions now - knowing we're not alone has brought us all closer together!

Christina that's a lovely thing to say (although today I've written about snot which isn't so good) but I wouldn't have a clue where to sub it! Writing magazine maybe? Hmmm, food for thought :o)

Huge commiserations on the eleven rejects! I suppose the only way to look on the bright side is, it could have been one every day for eleven days ... how miserable that would have been!
Will let you know if I beat that record ... quite likely ...!
The Write Woman

karen - think you should try any of the women's mags - especialy with the Wheels on the Bus which made me cry with laughter...

The Write Woman - thanks so much for understanding - and you're right of course, it's much better to get them all over in one go - still, I just have a feeling that NO-ONE is going to beat 11 rejects in one hit though... Sigh...