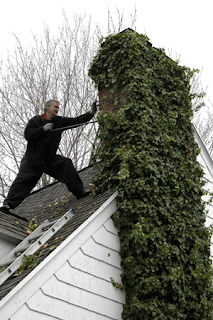 Well - phew - the Radio Europe interview went really well. Just finished and apart from um-ing and er-ing far too much (as always) I managed to keep up a flow of (hopefully) reasonably sensible dialogue. Hannah, the interviewer, was brilliant (she'd done loads of research, was very upbeat and asked all the right questions), let me chat for ages about Happy Birthday, gave it masses of plugs, and even allowed me to get a good name check in for the RNA and the Writers Bureau. So - that's that completed successfully, then. Mind you, this being my life, it could have all gone horribly wrong...

The neighbours (Wilf and Maudie) are getting to grips with their garden. They chose today, just now, while I was doing my interview, to decide to remove the rampant ivy which partially covers their house wall - and ours. I actually quite like the ivy because it makes the house look softer, the birds feed from the seeds, it looks pretty in the winter, and gives us some much-needed shade in the lean-to in the summer. However, Wilf and Maudie have decided (more likely someone in the Weasel and Bucket who's seen a BBC2 prog with Griff Rhys-Jones on the decimation of ancient buildings and totally misunderstood the structural difference between a 14th century abbey and a 20th century council house has told them) the ivy is eroding the brickwork and invading the roof tiles and the chimney and will therefore destroy the house by February, and so it has to go.

Wilf knocked on the door just as I was waiting for the phone call from Spain and explained they'd need to get into our garden to hoik out the ivy roots that can't be reached from his side. I said okay, but be quiet because I'm going to be on the phone... Wilf laughed. He probably thought I was talking to the speaking clock. Wilf is the only person I know who still phones the speaking clock.

Anyway, Radio Europe phoned me just as Wilf and Shaz's Dave knocked on the front door and shouted that they'd have to bring their ladders through the house because they couldn't negotiate the side alley into our garden (too complex to go into here - just need to say that Wilf was instrumental in getting all the alleyways in the terrace gated-off by writing to the council complaining that "schoolboys keep riding up my back passage"). So, while I'm trying hard to sound professional and calm on live radio, Shaz's Dave and Wilf are thundering through the house with ladders and bolt cutters and a buzz saw (for the ivy roots - hopefully) and loudly singing Alesha Dixon's "The Boy Does Nothing" - very badly.

Radio Europe thought it might be better if I went somewhere quieter. Like Budleigh Salterton? I went upstairs into the study. Dave and Wilf grinned at me through the study window from the top of the ladder and waved and sawed (nosily) at the ivy and sang some more Alesha Dixon. I closed the window and pulled the blind, phone under my chin, still trying to sound calm and cheerful as I explained to the ex-pats in Spain why I wrote romantic comedy rather than something darker.

Then Jerome called upstairs from our hall, looking for Wilf. I ignored him. I hate Jerome being in the house anyway because his electronic tag causes all sorts of interference with our electricals (and we've got enough problems with the computer) and the phone picks him up in a series of intermittent squawks. As Jerome reached the foot of the stairs, I vanished in a flurry of Morse Code bleeps, so Radio Europe and I dived into the bathroom. I did the rest of the interview sitting on the loo.

When I came out, Wilf had fallen off the ladder, Dave had cut himself and Jerome had eaten three rotten apples which I'd earmarked for the birds and some ham that was well past its sell-by and was set aside for the cats...

Most of the ivy, I'm happy to say, is still in situ and is likely to stay that way.
Posted by Christina Jones at 14:06

Bwahahahaha - I love it! Radio interviews gain so much from this kind of stuff too! It really adds to it. I interviewed someone once, I won't name her, she's a singer and half way through our chat I could hear some tickling and swooshing...it was obvious so I had to ask what was happening...'Ooh, sorry,' came the reply, 'I was just making a hot chocolate.' I kid you not, what a time to choose! lol I'm guessing I was one in a long line of phone interviews that day and the poor girl got a bit parched. It's always stuck in my mind though, it made it all the more special :o)

mummy - oh I'm so glad you found it funny - hurrrumphhhh... actually I'm sooo relieved to know that it's happened to you (only the other way round) because I thought I must be the only person in the world who could sod up a radio interview by my real life invading my writerly one... must admit, Radio Europe were very stoical and good about the whole thing, bless 'em.

And people wonder why you don't need to make things up, Chris!

Mind you, I was due to be on t'radio this week talking about Fair Deception and was phoned up and asked if I could get to the interview early, like in, um, 25 mins time actually because we've been let down and we need someone on the phone-in to talk about cliches and singers and is that okay? Sure, I said nonchalantly, before belting over there dodging the speed cameras, arriving 45 secs before we went on air only to find the hot topic of the day was SWINGERS!

OMG jan! So what did you DO? SAY? (I'm assuming here that you don't have first-hand knowledge of the swinging scene). So impressed that you got there in time, did it, didn't bat an eyelid or miss a beat - because you didn't, did you? Such a star! Local radio is brilliant for this sort of thing though - although do still remember feeling very miffed at being cut out of a Radio Oxford breakfast show because the Queen Mum had been inconsiderate enough to die just before I went on air...

Luckily, I remembered that there was a studio webcam just before my jaw hit the desk, then said as a Romantic Novelist, I thought sex without emotional involvement could be just a bit sterile and impersonal. And could we talk about cliches now, please?

Incredibly Interesting and
(H)'Ilarious, Chris.
I just went to see if Radio Europe had a Listen Again thingie and was out of luck!
Glad your ivy gets to live another day/month/year(s).

That was such a hilarious post!!! I could really identify, having myself had an interview on that same radio station last year. I was so nervous that they'd expect me to speak in Spanish or to know something (anything) about Spain, I could hardly remember what I was going to say about my books. But at least in my case, the only noise I had to contend with was my cat, who decided it was time for his daily screaming miaowing session, and got worse when I shut the study door on him, so like you (phone under chin), I had to rescue him, scoop him up onto my lap and put up with him clawing up my neck while trying to describe my latest book ... Why do we put ourselves through it?? Hope I sold at least one copy to an ex-pat after that, and hope you did too!

jan - see! as I said professional to the last! So proud of you winging it so brilliantly - think I'd have just giggled (as I did on the similar Book Babes prog - oooh blush...) and faffed... How cool are you???

pat - god I'm so pleased REM DOESN'T have listen again... It must have been truly awful - even if I didn't babble and gabble, the "noises off" will haunt me f'rever. I'm glad about the ivy too!

The write woman - oh - it's lovely to know I'm not alone! Thanks so much for sharing. Well done on managing to do it with feline help though (that could have so easily been me!). It's a lovely friendly station so let's hope we both managed to sound calm and cool and collected (vbg!) and sold some books. But as to why we put ourselves through it - that's something I ask myself over and over and over again...

Oh, dear, I feel quite ill with laughing! Poor Chris! You did brilliantly to keep sane and carry on with the interview with all the madness going on around you! Well done. I'm glad most of the ivy is still intact and that no lasting harm came to any of the neighbours after their various mishaps.

And have to say, I also howled with laughter at poor Jan's radio experiences! The mind boggles! What a woman, keeping cool like that!

mags - chuffed that the Joneses have kept you amused... Again... See, thanks to carefully vetted PR by publishers and agents, I think readers are only ever shown the glam side (what glam side???) of Being A Writer - but I think this Telling It Like It Is is much more fun...

That's hysterical. Poor Wilf, poor Jerome..., but mostly poor you, having to be interviewed with all that going on!

I don't know how I missed this the other day?

Glad it all went well.

I so needed a laugh after being screamed at by some hysterical man from Italy this afternoon.

debs - ooh you poor thing - sorry you've been shouted at. Unforgiveable. So awful when you can't shout back! Everyone seemed happy with the interview and I've had no complaints - and Wilf and co seem to have suffered no bad after-effects so - phew!

So funny :o)) Sadly, WE'RE the neighbours who would do that sort of thing! Poor Jan too, having to talk about swingers :oO

karen - much as I love your blog and always thought I'd like you as a neighbour because you make me laugh - I've now changed my mind (vbg) - oh yes, and I'm sooo glad it wasn't me who had to talk about swingers...

You may laugh. I'm still scarred.

The producer cut me a CD of the show - I haven't dared listen to it yet in case all I hear is myself going "Um..." and "Yes, well..." and general panicky flapping sounds.

jan - the scars will heal, they'll take time but they will heal - take it from one who knows. Possibly best not to listen to the cd just yet while it's still raw - snigger.... No, but seriously, I'm so glad it isn't just me...