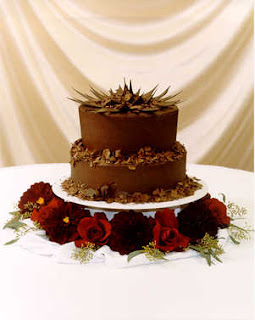 This is a sinful and disgusting post. So all those on diets please avert your eyes. I've been eating CAKE. Loads and loads of cake - and it was total bliss.

Elle and I spent the afternoon with the wedding cake designer - yes, designer. Not a baker, or a cake maker, or someone down the road who does a lovely light sponge - a DESIGNER.

As with everything else to do with the forthcoming nuptials, the cake has to be special. I, in my old-fashioned innocence, fondly imagined that the cake designer would be some sweet apple-cheeked old dear who had an album of photos of past wedding cakes - you know the sort of thing - "... and this is one I made for our Celia's Japonica and young Dirk last summer..." - with three pillared tiers, a nice covering of white icing, a few sugar paste flowers, with a little plastic bride and groom on top...

Oh how wrong can you be!

The designer was young, efficient, artistic and kept her creations on her laptop. They didn't even look like cakes. They looked like sculptures, works of art, things that should be exhibited in a gallery... They were stupendous concoctions - both in appearance and price. Lordy - the price! With one cake I could pay my mortgage for three months...

I kept pulling "you've got to be kidding" faces at Elle, but she was having none of it. She was entranced. I dared to mention a bit of rich fruit cake and royal icing. Elle and the designer looked at me as though I'd farted in church.

Apparently wedding cakes can be anything at all - but clearly not rich fruit and royal icing... They can be any shape, any colour, and made of practically anything edible... They are carefully designed confections to tease and engage all the senses (not my words). They are NOT white with - god forbid! - a bride and groom on top! Not unless you're being ironic.

The Toyboy Trucker and I had a nice rich fruit cake (made by his dad), covered in marzipan and shiny white icing - and yes, with a little bride and groom on top. We must have been very ironic indeed.

The designer showed us dozens of pictures and having discarded the "individual cup cakes on a Pyrex spiral" as being far too Tate Modern even for Elle - and me getting another glare for asking how any newly-wed couple actually cut a cupcake with the ceremonial knife without drawing blood - we rapidly moved on to mix and texture.

Having established that Elle and The Doctor had a fancy for their cake to be made of chocolate sponge (oooh - goody!!!), we swiftly moved on again from the content of these amazing cakes, to shape and structure. This time I kept my mouth shut about three tiers on little Doric pillars.

The cake Elle has in mind (and she's a girl who knows her mind, let me tell you) is to be huge (I cheered up here as this clearly means there'll be loads of gorgeous chocolate cake going begging come Easter...) and original and sort of like a volcanic explosion with different layers of dark, milk, and white chocolate (it gets better and better!) - with shards of carefully curled, shaved and shaped chocolate springing from it like a gigantic sunburst. The designer sketched a few ideas. Elle got very excited. I just tried not to think about the cost.

Then the really good bit - the tasting. The designer emerged with lots of freshly-baked miniature cakes in every shade of chocolate known to man. Some were just sponge, some were enrobed in thick, thick chocolate icing, some were oozing with chocolate cream, others were all three...

And this is where Elle stopped being a cool, calm and collected bride-to-be with her wedding tick-list on her BlackBerry and reverted to childhood. Okay, yes, so did I. For nearly half an hour we chomped and slurped our way through more chocolate than you'd get on an away day at Cadburys. She had chocolate all round her mouth, on her hands, in her hair and down her jacket. Me too. We giggled and cooed and groaned with greedy pleasure as we stuffed yet more gooey, gorgeous chocolate into our mouths until we felt sick.

It was absolutely fantastic. Heaven. My ultimate fantasy. And whatever cake she chooses - even if it isn't rich fruit and white icing with a little bride and groom - it'll be worth every damn penny... Although I now have a sneaking feeling that tomorrow's Weight Watchers weigh-in may be a very sorry affair indeed...
Posted by Christina Jones at 12:36

And just think, for once I cannot be blamed for your diet downfall and leading you astray!!!!!!!

It sounds utterly heavenly and I am very envious I couldn't have been there, too. Just to give an extra opinion, you understand.

I'm sure both Elle and the Designer would have given me one of "those" looks for asking this but do you remember those little cardboard boxes that took one slice of cake and could be sent through the post to those not able to attend? By the time they arrived, the icing was solid and the fruit cake dry and inedible. I hope they have a modern version for the swanky chocolate cake. I'll be eagerly awaiting the arrival of the postman next spring with my slice of white, milk and dark choccie cake complete with oozing cream inside and fudgy icing!!!!

Mmmm .... Actually, that's given me an idea! Remind me to tell you next time we pow-wow!

Well, I think it was very noble indeed of you to put aside your scruples and take part in the tasting.


Thing is, I have a horrible suspicion it would be like the wine tasting at Waitrose - could you actually tell the difference after the first couple of slices?


Reminds me if my wedding cake that I collected from the lady who made it in the back of the car. Drive very carefully, got it home unscathed. Then set off to take it to the wedding venue, went over a bump and heard a crack.. I'd dented it, one layer was cracked and the 'frill' effect was ruined. Bugger.

Moral of the story?
Make sure you get someone else to deliver your chocolate creation!

mags - I know, I'm very proud about being a glutton without any help from you at all! And yes, you'll be getting your slice (or three) of wedding cake next year! White choc for preference?

jan - yes! It was EXACTLY like that. In the end I just didn't care what it tasted like - it was CHOCOLATE and CAKE - and I shovelled it down indiscriminately until - well, until it wasn't there any more...

mummy - ooh dear. Poor wedding cake. Poor you. I won't pass that little story on to Elle in case she has nightmares...

Ooooohh, how exciting! I was only teasing, but would never turn down a slice of something deliciously sinful and chocolatey! White for preference, yes - you know me so well!!!

I won't mention the banned D word, but good luck, I hope you have a productive day and at least do more than I did yesterday and actually open the file!