When You've Got A Minute, Love 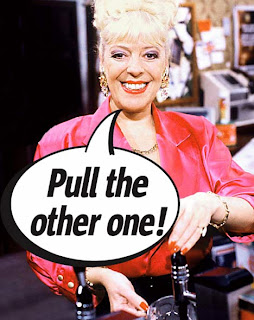 "When you've got a minute, love..." Those six words are the drinker's mantra and the barmaid's nightmare. Whether you work in a city bar or a country pub, you'll hear them over and over again. They'll be uttered by dozens and dozens of people a night, all with leery grins and empty glasses. You'll hear them in your sleep. They'll become the most irritating words you've ever heard...


And as I'm definitely a barmaid who writes rather than a writer who works in a pub, and because yesterday was a pub day, I thought I'd expand a bit on the other side of my working life.

I've been a barmaid on and off since I was eighteen. I've worked in cocktail bars, nightclubs, fancy restaurants, posh pubs and complete dives and I love it. People are funny. People in pubs are even funnier. There's nothing like working behind a bar for people-watching and I get loads of inspiration for my writing from my barmaiding. Barmaids are mother-confessors, lovers, mistresses, best-mates - all things to all men. The punters seem to forget you're a real person with a life outside the pub, and they regale you with the most hair-raisingly intimate details of their lives, never dreaming that they'll suddenly meet you face-to-face over the frozen peas in Tesco.

We've got two pubs on the estate - The Weasel and Bucket (which I lifted lock, stock and - er - barrel - how apt!) for the pub in Seeing Stars, and Hairy Harry's which became The Barmy Cow in Love Potions - and I work in both as and when needed.

This week, as well as the fair and Weight Watchers and the writing (what writing???) I've been needed in both and yesterday had to dash between the two. First it was a very busy lunchtime shift in the Weasel and Bucket. My near-neighbours, Maudie and Wilf, came in for the pensioner's special. It was goulash. Sometimes it's curry or chilli depending on what colour it turns out. We always serve it with rice and chips and bread and butter and a pudding, and for three quid it's quite a bargain and very popular among the older estate residents.

Well, Maudie and Wilf were halfway through their goulash, when who should walk in but their son Jerome with Nancy from the end house. Together. I don't mean holding hands or anything, but together none-the-less. Tracy, who was on lunchtimes with me, couldn't stop giggling. She's very young and not as used to Jerome and Nancy as we are in the terrace. Because it was sunny and autumnally warm yesterday, Nancy was in a pretty floral shirtwaister and peep-toe sandals but her moustache totally ruined the look. They ordered two pensioner's specials which Tracy was all for serving them, but I stepped in because neither Nancy or Jerome are a day over 45.

In the end Nancy settled for one full-price spag bol and asked for two forks. Maudie and Wilf got a bit worried over Jerome having a fork (probably because Jerome's social worker doesn't like him having pointy things in case he attacks his electronic tag or an innocent bystander) and no dinner, so I gave him some bread and butter and a spoon. This came in handy for his pudding which was yellow and lumpy so it might have been something and custard. Then they went and joined Maudie and Wilf for a game of shove ha'penny and, by the time I left, everyone seemed very happy.

And, yes, it bothered me afterwards that none of this seemed remotely odd to me...

Then last night I had to do three hours in Hairy Harry's. Fortunately this shift went without incident - unless you count old Arthur Pedley (yes, he was my template for Slo Motion but as he doesn't read anything other than The Sunday Sport I don't think he'll ever realise it and try to sue) being caught trying to beat the smoking ban (still) by having a crafty fag in the gents. As he loudly and fairly aggressively refused to relinquish his cigarette, I put it out by dousing him with the remains of a pint of cut-price Amber Ale. Arthur dropped the dog-end down his singlet in shock and smouldered for ages. We had to close the gents for an hour as the smell of burning pensioner and warm beer is never a good combination.

Hopefully I won't be needed behind either bar for a while as I must, must, must write Moonshine - but after yesterday's double-whammy, at the moment all I can hear in my head is the plaintive cry of "when you've got a minute, love..." Aaaargh!!!!
Posted by Christina Jones at 09:17

I love it!!! Thanks for the giggle, I was feeling a bit of a grouch today but your stories have cheered me up no end! Thank you :)

mummy - so glad it gave you a bit of a giggle - 'sall true (sadly) - my real life is MUCH funnier than my fiction... Hope you're feeling less grouchy now...

Superb stuff. Cheered me no end. And it is one of the reasons your characters are so wonderful and real and believable - because we all know people a bit like them!

mags - so pleased it cheered you up and yes, it's great for inspiration. Just hope no-one ever recognises themself though...

How wonderful, so many fascinating characters. I definately don't see anyone so interesting where I work.

Off to do more planting now.

ah, yes, but debs - you work in a Proper Job. With normal (ish?) people... Happy planting!

Great post, Chris.
Now... (Wait a second until I put my Bossy Hat on):
Get on with Moonshine or it'll be late getting published and I want to read it asap.

ok pat - you can take the bossy hat off now. I've got stuff to do over the weekend, but next week I'll do nothing but write Moonshine - promise. Well, apart from Friday when I'll be travelling to Manchester of course... Quite amused (?) to see Moonshine already listed on Amzazon with a blurb and a sales rating and I've only written 30 pages!!!!

just found your blog and it is great,plz plz hurry with your next book as i have nothing to read now and getting withdrawl symtoms for a good read,happy birthday was brill and i am going to read hubble bubble again for the 5th time makes me giggle every time :)

Ha ha ha - love the chain-smoking 'Slo' inspiration! You must have a riot with people watching, and transposing them into books. Good job old Arthur only reads The Sunday Sport! xxxx

helen - oooh - thank you! I never think anyone actually ever reads my books - and I'm so pleased you liked Happy Birthday (phew!). Delighted that Hub Bub makes you giggle and I'm writing Moonshine NOW! Promise...

claire - hmmm, think one day I'll get caught out by using my customers in the books... not by Sunday Sport Arthur though, thank goodness!