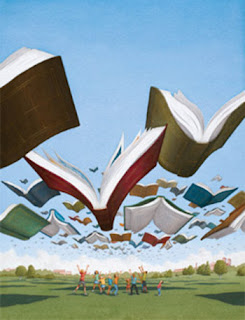 Well - the Manc Lit Fest has been and gone and it was a heady experience. Some parts of my trip Oop North were wonderful, others not so - but overall I had a great time.


Anyway, starting from the beginning as in all good stories - we set off (The Toyboy Trucker and I) from Oxford station (we decided to let the train take the strain as the ads say and not drive - nothing to do with carbon emissions, everything to do with not having a clue where to park in Manchester) and I'd packed the overnight bag, sorted out the cats' welfare with Elle and The Doctor, left spare keys with Vee and Em-next-door as Elle frequently locks herself out, and covered every eventuality. All the Toyboy Trucker had to do was remember a) to get some money from the ATM and b) pick up the mobile phone with all the Manchester contact numbers programmed in. And did he? Did he buggery.

We were standing on the platform at Oxford just as the train snaked into view when he confessed. Well, the money wasn't too much of a problem as we guessed they had banks in Manchester, although it meant, because I hadn't packed sandwiches, we'd have to starve/dehydrate on the 3.5 hour journey, but the phone was something else. Once we'd fought our way on to the train (memo to self - never again try to get on a train with twenty million home-going students, thirty million back-packers, and assorted pensioners on a cheap-day special) and had a bitter but short-lived row, we tried to find a seat.

Hah! Not a damn chance. We stood, cheek-by-jowl (literally in my case) with several dozen other morose passengers, crammed in the little vestibule at the rear of the train. It was that rattly, noisy, windowless bit they use for bicycles and unidentifiable lumpy packages. We all bounced against each other and bits of door handle all the way to Stoke-on-Trent. And that's a long, long time to share in close proximity with a group of complete strangers and a husband who's forgotten to do One Simple Thing.

Anyway, at Stoke we bit and scratched and kicked our way into two seats (mercifully not together) and my stomach rumbled all the way to Manchester.


In Manchester the sun was shining. This was lovely, of course, but as we'd believed the weather forecast, we were bundled in thick sweaters, boots and Peter Storm waterproofs. We were hot. Very hot. And smelly. And still not speaking. We trudged to the hotel to check in - and oh joy! We'd clashed with Man U playing at home and every United supporter in the world was checking in before us. The queue snaked three times round reception. Tersely I suggested to The ToyboyTrucker that he should go and find a hole in the wall to get some money while I checked in.

Cutting a long story short here, things did get a bit better after this. He got the cash (eventually - but only after he'd had to call out someone because he'd used the wrong pin number three times and the machine swallowed the card - but as it took over an hour to fight my way through the Man U fans to check in I wasn't aware just how long he'd been gone and he didn't tell me this bit until later...), I got the key, the room was lovely. All we really needed was the mobile phone to be able to contact the Lit Fest organisers to let them know we'd arrived and David at the Writers Bureau (http://www.writersbureau.com/) who was taking us out for a meal. Of course we could have gone down the old-fashioned route and used the room phone to call people if only we'd had their numbers.


We had another row in which The Toyboy Trucker reminded me cruelly of our trip to the Isle of Wight lit fest when I'd forgotten to pack any underwear...


Fortunately, Writer's Bureau David was far brighter than us, and knowing our hotel, turned up there to collect us. From then on things got soooo much better. David took us out on a tour of Manchester's night life and we visited old pubs and modern bars and had the most fantastic meal ever (sorry Weight Watchers!) at EastzEast (simply the most gorgeously decadent Indian restaurant in the world) where I'm sorry to say I made a proper pig of myself (well, I hadn't eaten all day, okay) and chomped steadily through the most glorious vegetarian menu I've ever encountered. Then we went for more drinks, and a wander round some of Manchester's lesser-known historical areas (I LOVE all that Gothic architecture) and ended up in an outdoor bar watching a multi-cultural late-night music festival. It was total bliss (thank you David - you're a star!) and about as far away from life at home as it was possible to get.

Then on Saturday it was the Lit Fest, and no-one seemed to mind that I hadn't phoned them to confirm I'd be there, and I had a ball. I forgot to be nervous because it was all so glam and swish and I was so excited. My fellow-panelists, Penny Jordan and Mavis Cheek (yes, I was in awe!), were lovely, as were the organisers, and we had a riotous couple of hours in Tiger, Tiger extolling the virtues of romantic writing in all its many hues, and our novels in particular, to a very appreciative audience (thanks, Pat!). I must admit I always feel such a fraud at these things because they're so far removed from my Real Life, but everyone seemed to enjoy it and they laughed with me (not at!) and we all sold and signed books at the end, so a good time was had by all.

Then, talking to each other again, we were back on the train (complete with seats!) and arrived home just before midnight to a rapturous welcome from the cats and a note through the letterbox from Elle to say she'd just locked herself out and couldn't remember if I'd left a spare key anywhere but not to panic because it was after she'd fed the cats, oh, and did we realise we'd forgotten the mobile, and she and The Doctor had gone for a night out in London and not to wait up...

And now it's over, and it was wonderful, and I've got to get back to reality and writing and barmaiding and forget about my glamorous couple of days living the high life Ooop North. Sigh....
Posted by Christina Jones at 00:25

I have just guffawed loudly in the office (note to self, remember to read your posts when at home).

Mind you I think that after my sulky face and grumbling that I've done all morning, my colleagues are probably just pleased to see I'm a little more cheerful.

So glad you had a great time (in the end) and that you are both talking to each other again.

Debs - well, so pleased someone found it funny - sniff! Seriously, glad it made you chuckle. But isn't it typical of MEN???? One simple task...

Your story made me laugh out loud too! Thankfully I'm at home! :P Debs!

It sounds like an eventful time was had by all. I've never been to that indian restaurant, it sounds divine! Anything yummy and veggie is fine by me! Mmmm and with that I'm off to put my extravagant 4 point soup into the microwave for lunch....
oh and forgot to say congrats on the 3lb loss! Fantastic!!

mummy - it was NOT funny at the time but we're okay now. Do try EastzEast if you get a chance - they have Bollywood boys and girls as hosts and waiters (so beautiful!) and everything about it was amazing. 4 point soup? FOUR? I'm on 0 point homemade vegetable - the sort that looks and smells like sick...

Oh, Chris, I never dreamt you'd had such a funnily awful time getting to Manchester! I'm glad you enjoyed your night out in - ON - the Town, though. I don't like Manchester one little bit.

OK, OK, I loved the Lit Fest, right! Seriously, it went down really well and you were great. If you were nervous it didn't show; you seemed so relaxed and your sense of fun showed in the answers you gave to Sherry's questions.

I thought I behaved well not asking in a sing-song voice (like I threatened to): "Where do you get your ideas from? Do you know any famous authors?" *snigger*.

IF there'd been time I would have asked what comes first - setting, plot or characters?

Sadly, time ran out all too quickly but at least we had a quick natter and thank you for the lovely present which I am enjoying very lots!

I'm glad Elle fed the cats before she locked herself out.

I'm so glad that everything turned out all right in the end, despite the mishaps, forgotten phone and the horrid journey up to Manchester. A bit uncalled for to bring to mind the forgotten underwear again!!!! Not funny for you, I'm sure, but it gave us a chuckle!!

Congrats on the 3lb loss last week. I hope that the well-deserved splurge on EastzEast veggie menu will not have interrupted the downward trend.

I'm very envious that you managed a whole chapter of Moonshine, but very proud of you. Sadly I cannot report the same progress. The deadline is two weeks away and panic is definitely morphing into hysteria!

I did say it was extravagant!!! But then that's why you're losing 3lbs a week and I've only managed 1.4!!

pat - thanks for being there and for sharing the bad habits and for not asking the question!!! The journey up was NOT awfully funny - just awful - ok??? Thanks - though I was nervous... Delighted you like the prez. And it's setting.

mags - Moonshine burst now a thing of the past. Don't mention deadlines again - hysteria has turned into blind panic. Ditto mentioning being knickerless on the Isle of Wight. Oh, the shame...

mummy - have just thrown the sick soup down the loo. Congrats on the 1.4!

Men - can't live with 'em, can't shoot 'em. Well done for not ending up on a manslaughter charge (wouldn't have been murder cos it was a justifiable crime).

tam - oh, believe me it came VERY close to MANslaughter. Still, he did secretly buy me a lovely pair of garnet ear-rings during the Saturday morning shopping spree and gave them to me on the train home with a little note saying sorry... Aaah!