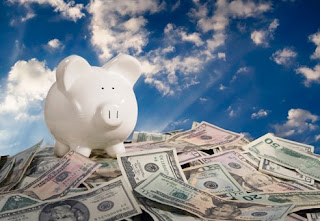 This morning - this wonderful, glorious, splendiferous morning - I have received royalties. Now, you might think for a writer this is nothing to make a song and dance about - but for me it's a BIG, BIG deal. Royalties have been sadly lacking in my life. I was, I'm sorry to say, sadly misled about royalties.

Having learned everything I knew about royalties - the magic money that allegedly appears "just like that" in your bank account every six months - from a Jilly Cooper novel where the heroine received her royalties in just such a way (yes, I know it was fiction, but I knew no better and I believed it, okay - oh, and I was also under a similar misconception about VAT payments courtesy of a Dick Francis novel but that's another and infinitely more painful story), when I first had a book published I assumed that's what would happen to me. That every March and September for the rest of my writing life some massive amount of money would be deposited in my account. Enough money for me to live a life of idleness, gluttony and hedonistic sloth until the next royalty payment was due.

Oh, those heady, innocent days...
As no-one in authority (here I mean my agent or publisher or anyone else slightly grown-up in the writing world who should have known that I was a total dill-brain) disabused me of this notion, and also because my first novel - Going the Distance - had a titchy advance and sold loads of copies courtesy of the WH Smith Fresh Talent promo thus providing me with a four-figure royalty sum just six months after publication, I was convinced that my Jilly Cooper idea was in fact correct. That for every book sold, you, the author, received 10% of the cover price. That my life of grafting in the pub and panicking about the overdraft was a thing of the past. So, come the next book and next royalty period, I simply expected the same amount to arrive. Hah! March came and went; so did April. Not a sniff of a royalty sausage.


I remember, to my everlasting shame, ringing my agent to enquire where my royalties were. When she said there weren't any I had a temper tantrum. No, I did. Honestly. I roared and screamed and drummed my heels on the floor. What, I enquired loftily, did she expect me to live on?

Oooh - the embarrassment when she explained (way too late in my opinion) how the royalty payment system works... Simply, you have to sell enough books to earn out your advance and then you get percentage royalties (read your contract, poppet) on every copy sold after the publisher has clawed back what you've been paid. Oh, the mortifying shock! The pain of realising that, even once I'd sold enough copies (about 27 billion) to pay back the (tiddly) advance, I'd then receive a small percentage of the cover price of each book. So, after the massive (and non-existent) 27 billion sales I'd get something like .05p per copy if I was very lucky...


And then, it was explained, that if books went into supermarkets the publisher paid to have them on the shelves, ditto the bookselling chains especially if your novel was to have a prominent position like at the top of the escalator or an end-on shelf-display - and don't talk about promos or windows! Just don't! So, those sales cost the publisher dearly, didn't cancel anything off your advance payment debt, and earned you, the author, sod all. But think of the kudos, poppet - the joy of seeing your book on the shelves in all those famous shops...

Bugger the kudos! Kudos didn't butter no parsnips in this house I can tell you. What I wanted - nay - expected - was hard cash. I wanted royalties. And there weren't any. And there never have been. Until today...

Today, much to my incandescent joy and surprise I've been paid loads (well, okay for me it's loads - for other authors it probably isn't) of dosh from Germany. Royalties. Real royalties. For Sommernachts-Zauber. This is the German version of Love Potions, and it came out (fabulous floral cover, by-the-way, which sadly I couldn't paste on here for some reason) in May this year. They paid me an advance of 5,000 Euros for it (which was lovely and made us and the bank manager very happy) last year, and the royalty period was only up to the end of June - and - bless its lovely flowery little cotton socks - it's earned me 7,000 Euros - IN A MONTH!!!!! Which means, I suppose, that to have earned out the advance, it must have sold tons of copies in Germany (although no-one has actually told me this and of course it might be some huge mistake) and right now I don't care because I've got ROYALTIES!!!!


And yes, I am going to sponsor myself and everyone else on the charity walk with lots of it because - well - because I damn well can!!!

P.S. I've just read this through and I know if I read it on some other writer's blog I'd go "smug cow" - so please, please don't think this was written to brag or show-off - I'm so skint and I was just so thrilled and excited!
Posted by Christina Jones at 10:37

Congratulation on receiving all those £££'s or rather Euros, brilliant news. How wonderful.

Thanks too for explaining how it works, even if I never have to know about it, it's still interesting. :)

So even if I get a publishing deal I still won't get any money????

My latest royalty statement showed that I'd sold 8 copies in the last six months - thus reducing the sum I owed to publisher to £94.

It's a glamorous life, isn't it?

Otoh, I have just received copies of my Hale book today and it's sooooo sexy and gorgeous that I've fallen in love with writing all over again.

Superb stuff! And what a fabulous surprise. I'm thrilled to bits for you. Does your bank manager need the paramedics for emergency resuscitation?! Enjoy every moment of it and I hope this is just the first of many more to come. You deserve it - so do your books.

Oh, and by the way, you could NEVER be a smug cow!

debs - thank you - it was a lovely suprise. Of course you'll need to know about it - it's just better to be forewarned so that you don't make the mistakes I did WHEN your first book comes out...

tam - welcome to the offically depressed club... it's a bloody stupid business. My royalty statements (they send them even if you haven't earned anything just to show you how few books you've actually sold and REALLY cheer you up) ALWAYS say I still owe money to the publisher. I'm in negative equity right across the publishing world... sigh...

mummy - thanks - I bought myself a pair of bling ear-rings to wear at the Manc Lit Fest and smiled all the way home.

jan - many congrats on the Hale book. I've seen the cover on your blog and it's gorgeous. It's things like that that make us carry on writing, I suppose - it certainly ain't the money...

mags - the bank actually phoned to tell me I'd had this money deposited today and asked if it was a mistake! That's how stunned they were! Lovely to know they have so much faith in my writing career... I'm still not sure it's mine, actually, and keep wondering if I should withdraw it before the error is discovered...

I was so shocked and delighted earlier that I forgot to say that I'm dead excited at all the extra ice creams you can down on my behalf next time you go to Jersey!!!!! All those flavours!!!

Oh In my dreams, in my dreams! Congratulations Chris and also thanks on explaining what REALLY goes on in publishing land.

Great news. Tou deserve any royalties. Draw everything out, have a great spending spree and hell to the overdraft and bills. Why everyone has not gone out and brought your books I do not know. They are unputdownable. Hubby moans that he has to cook his own tea!!!!. Well done again and cannot wait till Xmas when someone is buying me Happy Birthday

Royalties are always a cause for celebration since they appear to be as mythical as the Easter bunny in print publishing.

phillipa - dreams CAN and DO and WILL come true!!! Oooh, and if I REALLY started blogging about the reality of being a published writer we'd probably all be carted off screaming...

taggy - oh, thank you for that!!! What a star you are! I have so little confidence about my books - you've honestly made my day!!! And DON'T encourage me to spend any more of it!!! I've already bought more ear-rings and booked a holiday! Thanks as well for having Happy Birthday for Christmas - I really, really hope you'll like it.

Hiya - I have come to your blog from Phillipa, and this is SO useful. I have just signed my very first contract for a book out next July.... the percentages were the very thing I focused on LOL. I can only hope I get published in Germany!
Thanks again for the post - brilliant news. All the best, Ray-Anne

Congratulations on finally getting royalties, and welcome to blog land. This is the first time that I knew you had a blog (saw a link on Philippa Ashley's blog) and had to come over to say hi. Now I know how royalties work if you get an advance. I wonder how it works if you don't get an advance like me. We shall have to see next year after my first children's book is published.

Now I know how royalties are paid if you get an advance, but I wonder if they get paid the same way if you don't get an advance, like me. Will find out next year after my first children's book is published. Welcome to blog land Christina.

First, congratulations. Second, thanks for being honest about the process. Not many people know that's how the biz is. I was the same until I received my first royalty check.

Ray-Anne - hi, lovely to see you here - and many, many congrats on the book deal. Your first published book is like your first love - heady, wonderful and never, ever forgotten. Enjoy every minute of it - oh, and well done on being astute enough to read the bit in your contract about royalty percentages!!! I do wish I'd been that smart with mine - sigh... And I hope you get snapped up by Germany too and start raking in the Euros!!!

hi Julie - and great to hear from you - I do read your blog so I know what's going on in your world. Hopefully your contract will give you some idea of what royalties you'll be paid - presumably as you're not having an advance you'll make something from each book sold and the contract should tell you how much that will be - if it doesn't then I'd suggest you ask pdq!

nerdsnark - thanks for the congrats - and even more for the understanding! I hope my foolish fancies about royalties (and a lot of other things in the publishing biz) will help others from falling into the same delusional trap - big sigh... My blog intention is to be as honest and open as possible about my writing life - a true warts an' all account even if it is painful (to me!)